Alexander McCall Smith , a one man industry with over sixty books on a wide array of subjects including forensic aspects of sleep to criminal law of Botswana.

Born in Zimbabwe, he has lectured at various universities in Africa, including Botswana, where he lived for a time. For many years he was Professor of Medical Law at the University of Edinburgh and served on national and international bioethics bodies. Then in 1999 he achieved global recognition for his award-winning No.1 Ladies’ Detective Agency series, and thereafter has devoted his time to writing fiction, including the 44 Scotland Street, Sunday Philosophy Club and Van Igelfeld series. His books have been translated into forty-two languages. He lives in Edinburgh with his wife Elizabeth, a doctor.

Alexander McCall Smith will be in New Zealand to promote his new books in the No.1 Ladies Detective Agency series, Miracle at Speedy Motors and
Tea Time for the Traditionally Built. 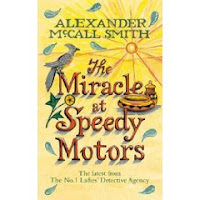 The Miracle at Speedy Motors is the ninth book in the popular series. Mma Ramotswe, the owner of the No. 1 Detective’s Agency, feels that her tiny white van, which has carried her about her business with such
reliability should be replaced by a more modern vehicle, but her husband takes a different view. Alongside day-to-day matters – such as Mma Makutis’ dowry negotiations – there are more difficult problems for Mma Ramotswe’s to solve. A client, who was adopted, asks her to trace her biological family. But will Mma Ramotswe’s searches bring happiness or something rather different, something rather frightening? 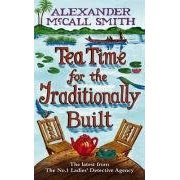 Tea Time for the Traditionally Built is the tenth book in the series. Mma Ramotswe is widely known for many things; for example, everybody knows about her kindness and her taste for redbush tea and cake – she is after all traditionally built. Mma Makusti is experiencing a crisis in her engagement to Phuti Radiphuti. A scheming woman, Violet Sophotho, has obtained a job at Phuti’s store, clearly intending to prise him away from Mma Makutsi. And Charlie has to deal with a young lady with baby who she claims is his
responsibility. Will this unsettle Mma Ramotswe?

You're missing so many of his books!! My favorite by far is Love Over Scotland (44 Scotland Street).
"44" is Smith's particular genius to be able to look on the brighter side of life, and he's seldom done so more enjoyably!

I'd love to write more for you blog concerning his books and I hope you don't mind me posting a little about "44". In summary
it gives us more of the gloriously entertaining comings and goings at 44 Scotland Street, the Edinburgh townhouse. Six-year-old prodigy Bertie perseveres in his heroic struggle for truth and balanced good sense against his insufferable mother and her crony, the psychotherapist Dr Fairbairn, going as far as to make a short-lived bid for freedom on a trip to Paris with the Edinburgh youth orchestra. Domenica sets off on an anthropological odyssey with pirates in the Malacca Straits, while Pat attracts several handsome admirers, including a toothsome suitor named Wolf. And Big Lou, eternal source of coffee and good advice to her friends, has love, heartbreak and erstwhile boyfriend Eddie's misdemeanours on her own mind...

BTW, if you like "Tea Time" I think you'll love "The Comfort of Saturdays"