A walk on the wild side
Sue Arnold writing in The Guardian, Saturday 27 December 2008
Nothing beats poetry read by the author him/ herself, even if, like Carol Ann Duffy or Andrew Motion, they don't have particularly strong voices. 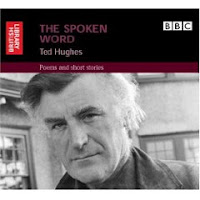 Ted Hughes: Poems and Short Stories
by Ted Hughes
British Library,
£15.50
The bonus with this recording is that Hughes has a marvellous voice — angry, gritty, macho, like his writing, but sensitive, too, with the sort of Yorkshire accent that puts you in mind of tough, laconic miners (the sort you glimpsed picketing in 1984) not dotty old "ee by gum" codgers in Last of the Summer Wine.
Hughes is sometimes described as a nature poet, a misleading description
if it makes you think of Wordsworth 's daffodils. The natural world observed
through Hughes's eyes — thistles, pike, foxes — is menacing, merciless, terrifying.
This, from his monologue spoken by a hawk in a wood, will make the hairs on the back of your neck stand up:
"I sit in the top of the wood, my eyes closed. / Inaction, no falsifying dream / Between my hooked head and hooked feet: / Or in sleep rehearse perfect kills and eat . /... / My feet are locked upon the rough bark. /It took the whole of Creation / To produce my foot, my each feather : /Now I hold Creation in my foot / Or fly up, and revolve it all slowly — / I kill where I please because it is all mine. / There is no sophistry in my body: / My manners are tearing off heads — / The allotment of death . . ."
It was recorded at the Poetry Society's diamond jubilee in 1969 before an audience who gave him a standing ovation.
And from the BBC website:
The Spoken Word – Ted HughesPoems and Short Stories and Poetry in the Making
On 15 October 2008, the British Library released two new additions to its popular series of literary spoken word CDs, featuring rarely heard BBC broadcasts of the late Poet Laureate Ted Hughes (1930 – 1998), recorded 1960 – 1992.
The Spoken Word – Ted Hughes: Poems and Short Stories, the first of a pair of 2CD sets drawn from the BBC radio broadcasts of Ted Hughes, features live and studio recordings of the poet introducing and reading his own work. The recordings include his earliest surviving poetry broadcast, dated 12 August 1960, in which he reads ‘The Captain's Speech' from The House of Aries and ‘Thistles' from Wodwo. The collection also includes extensive selections from Remains of Elmet and Moortown Diary, plus two complete short stories, The Harvesting and Snow.
Notable extracts include a broadcast dated 6 July 1970, in which Hughes is interviewed on the background and meaning of The Life and Songs of Crow, which he called his masterpiece, ‘if I am capable of such a thing as a masterpiece'. In another excerpt from a ‘Poet of the Month' programme, broadcast on 5 April 1992, Hughes discusses his appointment as Poet Laureate.
The Spoken Word - Ted Hughes : Poetry in the Making, draws on the broadcasts Ted Hughes made for schools, particularly the highly praised Listening and Writing series, later published as Poetry in the Making, in which Hughes aimed to encourage an interest in imaginative writing in 10-14 year olds.
Hughes explains the origins and development of some of his most famous animal poems, such as The Thought-Fox and Pike, and suggests techniques of concentration for translating thoughts into poems. The set contains five complete Listening and Writing talks, all illustrated with Hughes's readings of his own and others' poetry, plus two complementary programmes of readings from the collection Season Songs.
Recordings include Capturing Animals (1961), in which Ted Hughes talks about how his early interest in animals turned into capturing and keeping animals in the form of poems, and Meet my Folks! (1965), in which Ted Hughes talks about his imaginary family and reads the poems he wrote about them.
Posted by Beattie's Book Blog at 6:29 am