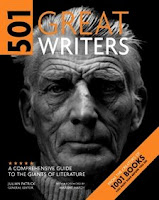 Each biographical entry includes an assessment of the writer’s literary innovations and cultural impact, supplemented with a list of the author’s major works, fascinating quotes, and intriguing asides. This book covers a broad range of literary artists, the giants of world literature really, those who have shaped the course of poetry, fiction and philosophical thought.

Loads of photos and illustrations, it is, of course, a dipping book rather than one you might sit down to read for any length of time. So far my extensive dipping has revealed two New Zealand writers, and they are the ones you would expect, Katherine Mansfield and Janet Frame.
An essential reference to the literary world, I know I will be returning to it time and time again.
And it is an absolute bargain at $35.00. Unbelievable value. I bought my copy at UBS Canterbury.They had a big pile of them, the English lit students will love them.
Oh, and I should mention Julian Patrick, the General Editor is professor of English at the University of Toronto. He deserves accolades for his work on this project, it's a cracker.
Posted by Beattie's Book Blog at 7:02 am