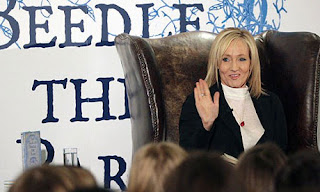 JK Rowling reads from The Tales of Beedle the Bard to schoolchildren at a 'tea party' in Edinburgh. Photograph: David Cheskin/AP
The book, a slim collection of five stories set in the world of Rowling's creation Harry Potter, has sold 2.6m copies worldwide since it was published on 4 December, raising £4.2m for the charity Rowling co-founded, the Children's High Level Group, which works with vulnerable children in central and eastern Europe.
Rowling today thanked everyone who had bought a copy of the book. "I am absolutely delighted that so much money has been raised," she said. "All royalties will be going to help children without families, many of them with disabilities, whose voices have been unheard for many years."
The book shot to the top of the UK's book charts immediately after publication, selling over half a million copies in its first 10 days on sale, according to book sales monitor Nielsen BookScan. This put it streets ahead of the other titles contending for Christmas number one, including Paul O'Grady and Dawn French's autobiographies, and Guinness World Records.
Read the full story at the Guardian online.
Posted by Beattie's Book Blog at 7:00 am