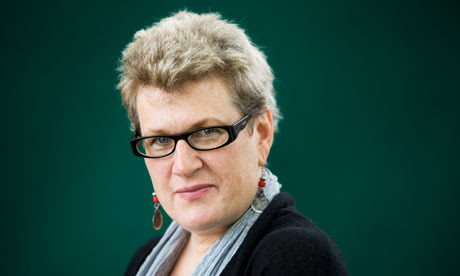 Meg Rosoff is one of the UK writers nominated for a body of work 'in the spirit of Astrid Lindgren'. Photograph: Murdo Macleod for the Guardian
Quentin Blake, Neil Gaiman, Meg Rosoff and Michael Rosen are competing for the world's richest children's prize, the Astrid Lindgren Memorial award.

The UK has mustered one of its strongest-ever showings for the SEK5m prize, with 17 candidates nominated for bodies of work "in the spirit of Astrid Lindgren". In total 184 candidates from around the world are in the running for the award, a mix of authors, illustrators, promoters of reading and oral storytellers.

"184 candidates or not, it feels very good to be nominated," said the former children's laureate Rosen. "It means that there are some people who think that what I'm doing is worthwhile. Producing children's books is full of complicated emotions about worth and being nominated for the Astrid Lindgren is a very clear way to feel a bit less complicated about it."

Rosoff, whose novels have won the Guardian children's fiction prize and the Carnegie medal, agreed. "There aren't many awards where I'd be excited about being on a 184-member longlist, but the Astrid Lindgren prize is more like being invited to join an exclusive worldwide club. Some of the people I most admire in the world are on the list – Wolf Ehrlbruch, Jutta Bauer, Maira Kalman, Peter Sís, Ulf Stark, Morris Gleitzman, not to mention David Almond and Michael Rosen from the UK. And of course Shaun Tan holds the current title – a thrilling and brilliant choice."

Sitting alongside fellow British nominees including Allan Ahlberg, Michael Foreman, David Almond, Michael Morpurgo and Shirley Hughes, "it's a great feeling to be a contender," said Rosoff. "I was so pleased to be longlisted – though I wouldn't say I'm exactly worrying about spending the money."

With candidates chosen by experts in children's literature from around the world, this year 66 countries are represented on the Astrid Lindgren longlist, with Cyprus, Ecuador, Eritrea, Greenland, Moldova, Mongolia, Tanzania and Zambia making their first showing in the line-up. Established in honour of the Pippi Longstocking author following her death in 2002, aged 94, the prize looks to reward "people and organisations who work in her tradition and safeguard democratic values". So Zambia's Lubuto Library Project, which creates libraries for Africa's street children, is up against The Very Hungry Caterpillar's creator Eric Carle, and Eritrea's Alganesh Solomon, a promoter of reading, competing with the UK's oral storyteller Liz Weir and book charity Booktrust.

The winner, chosen by a 12-member jury of international children's literature experts, will be announced on 20 March in Lindgren's birthplace of Vimmerby in Sweden. They will join previous laureates including Maurice Sendak and Philip Pullman.
Footnote:
New Zealand has two nominees - Joy Cowley and Margaret Mahy.
To read the full list of 184 nominees link here.
Posted by Beattie's Book Blog at 6:31 am