Love, and books, at the end of the road! 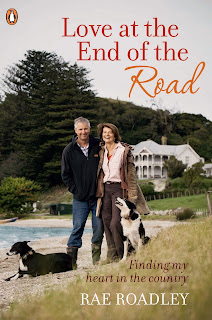 On the eve of the AB’s Rugby World Cup victory, Matakana was hosting its own festivities; the annual gala and Morris & James Pottery sale were in full swing and the Farmer’s Market was going off. The sound of bagpipers filled the air and the queue for whitebait fritters was the longest I’ve ever seen it – the mixture of nationalities making it feel like a weekend gathering of the UN! Amid the melee, I encountered inveterate Village Bookshop owner Tracey Lawton busy hosting a morning signing for Kaipara author, Rae Roadley, whose memoir Love at the End of the Road has just been published to warm notices. Indeed, front and centre on the signing table was David Hill’s enthusiastic review, which had just appeared in  Canvas Magazine and proved to be a handy prop for Rae as she settled in for a two hour signing session. She charmed the passing parade in much the same way that Love at the End of the Road charmed David Hill. Here’s to charming and enthusiastic reviewers, authors and booksellers! 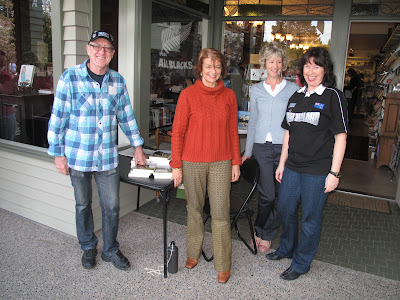 And from the NZ Society of Authors latest bulletin:
Soon after returning to her hometown in Northland, New Zealand to work as a journalist, Rae meets Rex Roadley through a rural dating service. Rex’s beef and sheep farm at Batley, on the Kaipara Harbour, has been in his family for almost a century, however these days the only evidence of the spot's fascinating historic past is a magnificent two-storeyed villa standing alone on the point.
As Rex and Rae’s relationship deepens, they set about making a home together and Rae is drawn into every aspect of life on a 400ha farm and in a small rural town. We also see evocative images of a by-gone era: there is strife between Ngapuhi and Ngati Whatua; settlers arrive; Batley becomes a port and centre of industry; oyster spat catching begins.
This candid, courageous and humorous story explores universal themes. Rae writes unflinchingly, but with a light touch, about what she gives up, and gains, in her new life with Rex, and just what it means to find ‘love at the end of the road’.
Rae Roadley is a qualified journalist, freelance writer and newspaper columnist whose wryly amusing tales of rural life earned many followers and led her to delve into the history of her home and community. A writer for many years, she is a past recipient of an NZSA mentorship, and a writing tutor. This is her first book.
Posted by Beattie's Book Blog at 7:09 am