Carol Ann Duffy – the newest of the bee poets 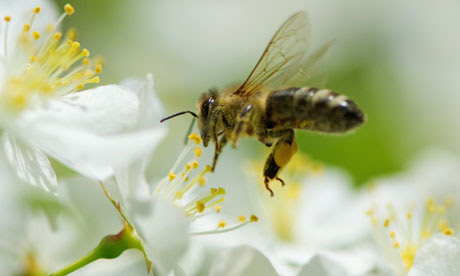 Bees – miraculous insects that have moved many a poet into action. Photograph: Uwe Anspach/AFP/Getty Images
When Carol Ann Duffy's first collection of new poems as poet laureate was published this month, she joined a long list of acclaimed scribes dating back to Roman poet Virgil who have eulogised the honeybee in verse for their social organisation, honey-making abilities or pollination services, or employed them as a potent metaphor and symbol.
In The Bees, Duffy's "winged saviours" – to borrow a phrase from another famous bee poet, Sylvia Plath – are woven throughout the collection to symbolise all that is good in the world and necessary to protect. In many of the poems she draws attention to the seriousness of their plight. In Virgil's Bees, for example, the poem she wrote in the Guardian for the 10:10 campaign to reduce carbon emissions, her clarion call to save the planet is to "guard them" [the bees] "the batteries of orchards, gardens".
People understand that bees are a barometer of the environment, that their demise is a warning system that our ecosystem is in jeopardy. Albert Einstein may never have actually said that if the bees disappear of the face of the earth man only has four years left to live, but its message resonates.
I'm no poetry critic and I find many poems inaccessible, but Duffy's bee collection is a heartfelt lyrical wake-up call to the dangers facing these miraculous insects and, by extension, humankind.
In Telling the Bees, she tries to impart the full horror of what dying bees means for humanity with the ending, "No honey for tea," which evokes those final haunting words, "Is there honey still for tea?" from Rupert Brooke's famous First World War poem The Old Vicarage, Grantchester, a paean to the safety and civility of England.
Ariel is Duffy's fierce attack on intensive agriculture's pesticides and monoculture that are threatening bees. "Where the bee sucks, neonicotinoid insecticides in a cowslip's bell lie," she warns, describing its systemic nature as "sheathing the seed" and "seething in the orchards", while the land is "monotonous with cereals and grain".
I never thought when I became a beekeeper that it would widen my appreciation of poetry, and open up a new world of celestial creatures bearing honey as a gift of heaven, (to paraphrase the Virgil in his beekeeping thesis, Georgics IV).
Neither did I expect when I was researching my book A World Without Bees that poetry would come to mind as I witnessed 40,000 white hives lying empty and silent in what looked like a mass grave in the Californian desert. But it was Sylvia Plath's 1962 poem, The Arrival of the Bee Box, where she compares a new beehive to the coffin of a baby, that lingered.
Award-winning poet Jo Shapcott told me that A World Without Bees had inspired some of the poems she wrote for last year's Poetry of Bees, an event commissioned by the City of London Festival and Poet in the City 2010 One of the poems was specifically on the mysterious bee killer, colony collapse disorder.
Now that poets have joined the bee rescue party, we would do well to head their warnings. In Duff's cautionary poem, The Human Bee, of people pollinating orchards by hand when all the bees have been killed – as happened in the southern Sichuan province of China following pesticide poisoning – her protagonist, The Human Bee, laments: "But I could not fly, and I made no honey." It perfectly illustrates how we can never replace nature's master pollinator.
• Alison Benjamin is co-author of A World Without Bees and Bees in the City
Posted by Beattie's Book Blog at 7:56 am