BEFORE WE SAY GOODBYE 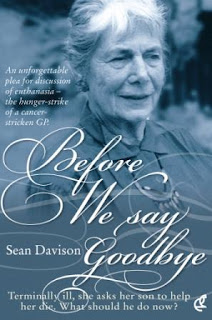 Author Sean Davison went on trial in Dunedin yesterday for the attempted murder in 2006 of his mother, Pat Davison who was terminally ill with cancer. Some of my readers will recall that Cape Catley published his book, Before We say Goodbye, in 2009 which is about his experiences caring for his mother after she asked him to come back from South Africa.

Sean Davison has pleaded not guilty. The trial is set for three weeks, with some 25 witnesses called.
He was released on bail last year and allowed to go back to Cape Town where he heads a DNA laboratory at a South African university which works on human rights cases.

One assumes that the book, or extracts from it will be used in the trial?
Since writing above I see a story in the NZ Herald this am - Accused was warned of book's backlash
Posted by Beattie's Book Blog at 7:09 am