Published Wednesday 26 October, 2011 on Outpost
Blogs from the staff of Auckland Art Gallery Toi o Tāmaki
The Gallery’s staff is much saddened to learn of the passing of Sir Peter Siddell. We extend to his family and friends our heartfelt condolences.
Peter and his late wife Sylvia were close friends of Auckland Art Gallery Toi o Tāmaki over many years. At the launch of the impressive illustrated book dedicated to his work, I spoke to those present about how much the public admire Peter’s paintings as being about their shared memory and experience of Auckland.

In particular, I mentioned his renowned Homecoming that is a valedictory work where Peter remembers his childhood. His visits to this Gallery over many years are recalled by the inclusion within the house of his favourite New Zealand paintings in this collection. This work includes the impressive 19th century merchant’s house in Ponsonby Road that is now occupied by the ASB Trust. Siddell places the building against a volcanic landscape that is typical of Auckland but impossible to identify as being in any one particular suburb. The landscape and the house reveal memory as being inseparable from how we experience a place. Peter once noted that 'Most of the time I paint what I know . . . usually from childhood recollections'. He had delivered the New Zealand Herald newspaper in early-morning Auckland as a boy, so he knew the streets of the city very well.

Peter stated that his ambition is 'to achieve a stillness in my paintings. It's something to do with wanting to freeze a moment in time and regain a bit of the past'. His cityscapes bring together the volcanic landscape and colonial buildings from throughout Auckland. People are almost never included; instead their habitat is focused on. The dramatic late afternoon sky in Horizon 1987 is both dramatic and menacing. This painting was a special gift to the people of Auckland by the Friends of the Gallery. 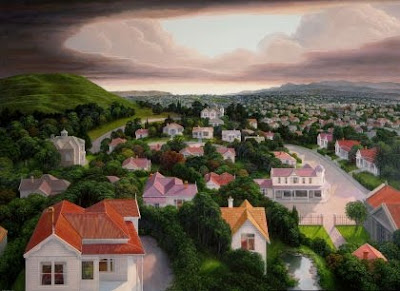 Some years ago, the Hon John Banks, then Mayor of Auckland City, personally hosted a mayoral luncheon for Peter, Sylvia, their family and friends. It was a happy event where all present saw how much Peter and Sylvia had contributed to this city’s art community for decades. Their passing is mourned.

Dr E H McCormick noted in his 1957 inaugural Friend’s lecture: ‘There are, in fact, several Aucklands: there is an ecclesiastical Auckland finely expressed in the frail perfection of the Selwyn churches; there are the homes of Epsom and Mount Eden redolent of a more spacious past; there are the acres of decaying wood that stretch from Ponsonby to Parnell Road.’

Peter understood Auckland with a true valuing of its history. I once said to him that he was an artistic heir of the Reverend Dr John Kinder, arguably one of New Zealand’s finest colonial painters and photographers. With that marvellous and quizzical smile of his, Peter replied ‘Oh Ron! I am never so preachy but I much appreciate your compliment!’ He knew that ‘seeing’ Auckland is about much more than recognising its topography. We will miss this lovely and generous man.