How children's books escape the page

Children's books seem especially apt for adaptation by TV, film and theatre, and some have slipped into the cultural mainstream - Michael Hann - The Observer, Sunday 23 October 2011 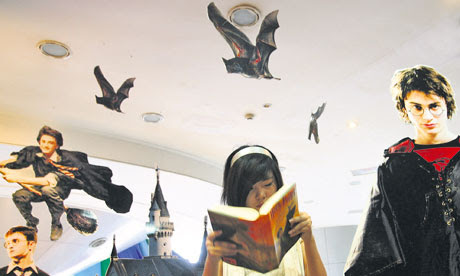 Chinese fans flock to bookstores for Harry Potter In Nanjing -Photograph: China Photos/Getty Images
Everything, bar the house elves, is bigger in the world of Harry Potter. The books run to many hundreds of pages; their sales dwarf those of other children's books; the film adaptations have been, for several years, the big commercial event of the movie calendar. So when Potter comes to the web at the end of this month in the form of pottermore.com, it will be the highlight of the year for millions of readers.
The draw for those readers will be the 18,000 words of new content about the boy wizard and his acolytes and enemies, though retailing will also be a mighty part of its purpose. Early word from those who have seen the beta version of the site is good, though it only covers the first Potter novel so far.
Pottermore may be the most ambitious attempt to extend the legacy of a children's book, but it's just the logical technological extension of a process that began when print ceased to be the sole means of mass communication. Kids' books have become radio and TV serials, feature films, cartoons, audiobooks – and now they are becoming apps, websites and more.
But isn't there a risk that all the bells and whistles take away from the original book, restricting the limits of the young reader's imagination – especially with films? "There can be the danger that the visual impact takes over," says Elv Moody, the editorial director of Classic Puffin. "But sometimes it can work the other way. Film can be a great way into a book that might have seemed too grown-up to read." She thinks this autumn's films of Jane Eyre, Wuthering Heights and The Three Musketeers will attract a new audience to those books, and points out that Tim Burton's Alice in Wonderland prompted a massive uplift in sales of Lewis Carroll's original book – even the Puffin edition, which had no film tie-in.
Full story at The Observer.
Posted by Beattie's Book Blog at 6:35 am