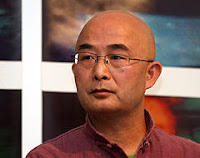 The Auckland Writers & Readers Festival with support from Text Publishing and Cable Bay Vineyards announce one event with dissident Chinese writer Liao Yiwu on Saturday 19 November.
One of China’s most persecuted writers Liao Yiwu fled into self‐exile to Germany in July of this year, leaving behind his family. ‘I’m trying to convince myself that I won’t be away from China very long, that things will change sooner than later”, he said.
In 1989 he published his poem ‘Massacre’, a condemnation of the Tiananmen Square killings and was
brutally imprisoned for four years. Since being released, he has been denied an exit visa 17 times,
hauled from planes and trains and threatened with further imprisonment.
His widely acclaimed The Corpse Walker and Other True Stories of Life in China is a collection of
interviews with people he encountered in prison and during his wanderings in the southwest. It tells
the unadorned stories of 27 people, among them a public toilet attendant, a persecuted landlord,
and the men, known as corpse walkers, whose job is to transport the dead back to their hometowns
for burial. The book is banned in his homeland. His recent book soon to be published in the United
States is God is Red: The Secret History of how Christianity Survived and Flourished in Communist
China. It provides an unprecedented glimpse into a deeply complex religious and political reality.
BIOGRAPHY: Liao Yiwu is a Chinese writer and musician. In 2007, he received a Freedom to Write
Award from the Independent Chinese PEN Centre.
In July 2011, Liao Yiwu escaped to Germany after repeated attempts to publish his books were
obstructed by Chinese authorities. He was also refused permission to leave China to attend the
Sydney Writers' Festival earlier this year. He spoke to ABC’s The World Today program, here.
Watch Liao Yiwu play, sing, chant, read and answer questions in a recording of the recent PEN
America event with Salman Rushdie and Philip Gourevitch at the New School, New York. This
recording runs for almost an hour and a half. Liao’s beautiful opening performance begins at 6.45
minutes.
Don’t miss this unprecedented opportunity to see Liao Yiwu, in conversation with Gilbert Wong at
a one‐off Auckland event at 4pm on Saturday 19 November at The Fisher & Paykel Auditorium at The
University of Auckland’s Business School, 12 Grafton Road, Auckland.
Tickets: $30 or $20 for students, Club Members and Friends of the Festival. Tickets are strictly limited so please book early to avoid disappointment: www.iticket.co.nz or 09 361 1000.
Please note a translator will also be on stage.
Posted by Beattie's Book Blog at 8:47 pm