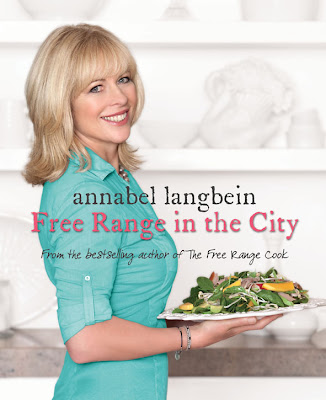 Living in the city is no barrier to cooking and eating fresh, seasonal food – and bestselling author Annabel Langbein has written a new book to prove it.
The book is well summarised in Annabel's introduction:
People are often surprised when I say I spend more than half my life in the city. They tend to think of me as a country person, given that we film my television series Annabel Langbein The Free Range Cook at our little cabin on Lake Wanaka.
Wanaka is my bolt-hole, where I go to recharge my batteries and reconnect with a very simple rhythm of life, but the practicalities of modern living mean that my husband Ted and I are frequently drawn back to the rush and bustle of Auckland. That is where our work is based, where our kids went to school and where we enjoy the company of our oldest friends.
At the Wanaka cabin we grow pretty much all our own food, eat seasonally, head off on adventures to forage and fish, and connect with the seasons and our small rural community. In the city it’s much harder to feel connected. When my kids were small and I was juggling the demands of bringing them up with those of a growing business, I used to end the day’s work feeling exhausted. The last thing I wanted to think about was what to have for dinner, and I seldom invited people over because it felt too stressful.
In an epiphany of sorts, I decided I needed to live differently and to bring what I could of my country life to the city. After all, every moment makes up the sum of a life. So I made a conscious decision to allow time for taking a picnic lunch to the top of a hill, meeting friends after work for a barbecue at the park or beach, or having friends over for Friday drinks or a simple Sunday lunch.
I also set aside time to tend and enjoy my city garden and to visit farmers’ markets at the weekends to reconnect with the rhythms of the seasons. And you know what? I was astonished at how much more in control. I felt, how much more pleasure I took in small things and even the amount of money I saved. In my rush I had shopped inefficiently without checking to see what we needed, coming home with things we already had, and because I never checked use-by dates, things went off before I could use them.
In the western world we throw out an estimated 30 percent of our food. That’s a huge amount of wastage – money, fuel, transportation and time – and because the bulk of the food waste goes into landfills, where it produces masses of the potent greenhouse gas methane, it contributes dramatically to climate change. In the UK, figures show that if everyone stopped throwing away food that could have been eaten, it would have the same effect as taking one in four cars off the roads.
My television series Annabel Langbein The Free Range Cook struck a chord with viewers with its emphasis on getting back to the land and rediscovering forgotten domestic arts such as breadmaking and beekeeping. All around the world there is a shift towards living a simpler life. Lots of skills that have been lost by our consumer-driven generation are being revived and valued again.
Growing vegetables, keeping chickens, baking and making preserves when fruit is at its peak are simple acts that embrace a spirit of resourcefulness. Whether you’re making breadcrumbs from old crusts, saving scraps for the compost bin or worm farm, freezing over-ripe bananas for smoothies or cakes, or making stock from the carcass of a roast chicken, it’s about appreciating what we do have instead of constantly clamouring for more. Introducing small elements of positive change into your day doesn’t have to be a chore – in fact it’s a sure-fire way to feel good about yourself. You feel so virtuous when you refuse a plastic bag at the dairy, wrap the kids’ lunches in kitchen paper instead of plastic or cover your leftovers with a saucer the way your grandma did, instead of tearing off yet another sheet of plastic wrap that will never decompose.
A more resourceful and sustainable way of life doesn’t need a big backyard or lots of spare time. Even if you live in an apartment or the middle of the city, with a little forethought it’s easy to embrace a lifestyle that allows you to feel part of your community and environment. Daily life is more satisfying when you create small moments that take you beyond the everyday rush, when you take time in the moment to celebrate your wins, debrief on your challenges and dream for your future. And the dining table is the perfect forum for all that.
Even on days when the big picture threatens to overwhelm you, crafting good food offers a simple way to feel useful, successful and connected. There’s a deep satisfaction to be found in creating a life around the kitchen table, nourishing yourself as well as others.
Over the holiday weekend I made the following recipe from Free Range in the City and it went down a treat. 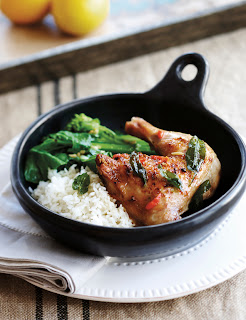 Ginger Chilli Sweet and Sour Chicken
I prefer chicken thigh quarters for this treatment as the meat is more flavoursome and it stays wonderfully succulent when baked. This combination of Asian flavours including chilli and ginger offers a new take on sweet and sour.
Prep time          10 mins
Cook time         35-40 mins
Serves               4
4 chicken marylands (thigh quarters) or 1 whole free-range chicken, quartered
salt and ground black pepper
2 tbsp neutral oil
3 tbsp sugar
3 tbsp white vinegar
1⁄2 cup white wine
1 cup chicken stock
1⁄2 long red chilli, deseeded and finely chopped, or more to taste
11⁄2 tbsp grated fresh ginger
2 fat cloves garlic, chopped
1 tbsp fish sauce
To garnish (optional)
neutral oil, for frying
small handful mint, basil or vietnamese mint leaves
To serve
cooked rice lightly cooked greens
Preheat oven to 200°C. Season chicken with salt and pepper. Heat oil in a large cast-iron baking dish and brown chicken all over, working in batches if necessary so as not to overcrowd the pan. Remove chicken and set aside.
Drain oil from the pan, add sugar and vinegar and cook over high heat until mixture starts to caramelise. Add wine, stock, chilli, ginger, garlic and fish sauce. Bring to a boil then return chicken to dish and cover with juices.
Bake uncovered, basting several times with the cooking liquids, until chicken is golden and fully cooked (about 35-40 minutes).
While chicken is baking, prepare the fried herb garnish, if using. Heat 2cm oil in a small pot until it shimmers and fry mint, basil or vietnamese mint leaves until they just change colour (about 5-10 seconds). Lift out with a slotted spoon and drain on paper towels.
Serve chicken with rice and lightly cooked greens, with any remaining cooking liquids spooned over the top. Garnish with fried herbs, if using.
Annabel Langbein Free Range in the City
RRP $59.95. 320pp, hard cover, 216x253mm
portrait (same size as Annabel Langbein The Free Range Cook)
About Annabel Langbein
Annabel Langbein is New Zealand’s leading celebrity cook, food writer and publisher, and the star of her own successful international television series, Annabel Langbein The Free Range Cook. The 13-part series was produced in association with TVNZ and distributed by international media giant Fremantle Media and has been sold into 79 territories around the world. A second series is now in pre-production.
Annabel has self-published 18 cookbooks, which have won numerous international awards, been translated into multiple languages and sold close to two million copies throughout Europe, North America and Australasia.
The book that accompanied the first series of Annabel’s television series, Annabel Langbein Free Range Cook, became a publishing phenomenon when it sold close to 150,000 copies in New Zealand alone in the eight months following its release in September 2010. It has since been published in Australia (by HarperCollins) and the UK (with Octopus) and will be released in France (with Larousse) in September 2011 under the title Annabel au Naturel.
Annabel has a Diploma of Horticulture from Lincoln University and grows much
of her family’s fresh produce in extensive organic vegetable gardens at her Auckland home and the rustic cabin on the shores of scenic Lake Wanaka where Annabel Langbein The Free Range Cook was filmed.She is a member of the Sustainability Council of New Zealand and a passionate advocate for using seasonal ingredients as a means to cooking and eating well.She believes in empowering people to make easy, delicious meals using fresh seasonal produce. “I love to cook,” she says. “I’ve been involved with food all my life and writing and publishing cookbooks for the past 20 years. My very favourite thing is inspiring people with fun, easy-to-prepare recipes that will make them a star in their own kitchen!”
For more information see:
http://www.annabel-langbein.com
http://blog.annabel-langbein.com/
http://www.facebook.com/annabel.langbein
http://twitter.com/annabellangbein
Footnote:

Annabel's previous title The Free Range Cook has sold 150,000+ copies in the NZ market with the seventh reprint has just arrived in the country this week.
I reckon this may well make The Free Range Cook the biggest ever selling cookbook in NZ publishing history apart from the Edmonds Cookbook of course but I doubt even that perennial title has never sold 150,000 copies in under 12 months.This is a truly phenomenal performance. And then of course there are the significant overseas sales too. 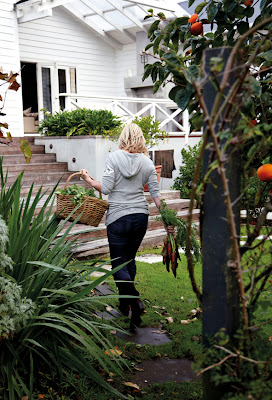 Great news about Annabel's new book and yes 150,000 is tremendous but you might want to check with Penguin re the first Allyson Gofton food in a Minute I recall Whitcoulls getting a framed certificate for selling huge amount in a very short time and I think over 120,000 sold before Christmas that year same as Annabel.
Went to the launch of Al Brown's Stoked and he did a really passionate speech about food and entertaining.
Good cook books are still in demand with Soul and Molten joining the list plus Malouf -a beauty and personally I love A Vintage Tea Party and Scandilicious- one of the perks of the job is having first pick of the best books.
I knocked out an Annabel Lemon Cake on Monday it's such a great cake to go with strawberries and cream and literally takes moments to get in the oven and it was really good to go in the garden and pick the lemons.

Annabel Langbein's editor Jane Binsley reports - Annabel has three books on the Booksellers Bestsellers list this week. The new book is at number one in the non-fiction chart after just over a week on the shop shelves, The Free Range Cook is still at number 7 more than a year after publication, and The Best of Annabel Langbein (first published in 1998) is at number 10!