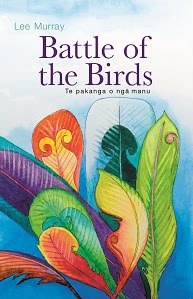 Lying on an ancient effigy mound in Wisconsin, Annie, 11, is daydreaming of New Zealand when the eagle-shaped mound breaks free from the earth and flies her back home. But it’s not a New Zealand Annie is familiar with, and when she encounters a giant moa, Annie realises why. She’s arrived a thousand years too early, and right in the midst of a battle between the birds!

Speculative fiction for young people at its very best. I can understand why former leading librarian and authority on teenage literature Barbara Murison said  'The battle scene is one of the best I have read.'

About the author:
After a varied career in the United Kingdom, United States and France, Lee returned to New Zealand and is now writing from her home in Tauranga.  'Battle of the Birds' was published in September 2011 and is her first novel .


Taramea Publishing was established in April, 2008 by Candice Paewai. Candice is a former teacher, osteopath and naturopath, practising the latter two in London. Unable to continue in practice after a spinal injury, Candice turned to writing. Her research and interests since her return to New Zealand in June 1999 have taken her down the path of her ancestors (tupuna); into the ngāhere (New Zealand forest), amongst the native flora and fauna; into the ocean, the realm of Tangaroa; and into healing and rongoa (Māori herbal medicine).
Taramea Publishing is a vehicle for publishing stories based on these interests. Its long term goal is to aid other writers with similar interests and aspirations.