Christos Tsiolkas: 'There's a tameness to the modern novel'

Christos Tsiolkas, the Greek-Australian author of controversial bestseller The Slap, on the joys of moussaka, the crisis in Greece and seeing his characters on a TV screen 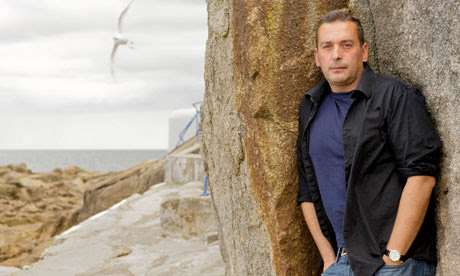 Christos Tsiolkas: 'My mum read The Slap in Greek and rang me saying, "How do you know how we think?" That was the best review I've ever had.' Photograph: Paul McCarthy
Your bestselling book, The Slap, which charts the ripple effect of a man slapping someone else's child at a suburban barbecue, is set in your home town of Melbourne. In Britain, most of us know Melbourne as the setting for Neighbours. Were you keen to show another side to the city?
I did think, I'm going to do the antithesis of Neighbours. I wanted to show the world I live in, a world I don't see reflected in Australian literature or on screen. Australia has a big chip on its shoulder about being suburban and middle class. Dame Edna Everage represents a kind of nightmare of the suburbs. But the Australian middle class now is made up of second- or third-generation immigrants, like me, and the white face of Neighbours gives me the shits.

Your first novel, Dead Europe, about to be republished here, was darker in tone…
Yes, Dead Europe was a very different book. For me, it was about cutting off the ghosts of Europe. The Slap was completely about my place, about Australia: that was how I saw it.

Your parents emigrated from Greece after the second world war. You were raised in a Greek community and didn't speak English until you went to school. Do you feel more Greek or Australian?
For a long time, until my late 20s, I felt the romance of Greece. When I went there, I loved it, I felt joyous, but it wasn't home. I came away thinking, I'm not Greek, I'm Australian.

So do you prefer moussaka or Vegemite?
[Laughs] Moussaka, definitely. I didn't grow up with Vegemite in the house and my parents were quite appalled the first time I ate it.

Did your parents like The Slap?
It's been interesting because they don't read English so they had to wait for the Greek translation which only came out earlier this year. I was nervous about their reaction but they responded well and they really liked Manolis [the Greek patriarch character]. Mum was ringing me saying: "How do you know how we think?" That was the best review I've ever had.

I imagine, with all the graphic sex scenes you wrote, that might be a hard thing to give your parents to read…?
[Laughs] Yes, writing sex was one of the big challenges.
Read the full interview at The Guardian.
Posted by Beattie's Book Blog at 5:29 am