The Reinvention Of Love 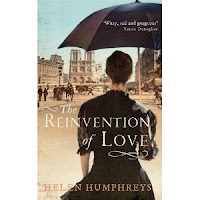 There is a trend at the moment for fictionalising the lives of real people, particularly literary figures. Already I’ve read novels about the poet Rupert Brooke and the writer Ernest Hemingway. The latest addition to the genre, The Reinvention Of Love by Helen Humphreys (Profile, $36.99), is a re-imagination of the love triangle between 19th century French writer Victor Hugo, his wife Adele and the literary critic Charles Sainte-Beuve.
The story begins in 1830s Paris with the young Charles being challenged to a duel by a newspaper colleague he has insulted. And so we learn from the off that Charles is a little vain and rather rash, with a flair for getting himself caught up in complicated situations.
In love with Adele Hugo and in awe of her husband Victor’s talent, he is part of their inner circle, the godfather of their youngest daughter and a regular at their home. For a while he manages to continue both the love affair and the friendship: meeting Adele in a public park or hotel room, sometimes dressing as a woman (although judging by the photograph included he wouldn’t have made a terribly convincing one), and meeting her in a church. Their love affair is all fierce passions, snatched moments of joy then long torments of separation; made more poignant by the fact Charles has a secret physical impediment he believes makes him unacceptable to most women. It ends when he makes the mistake of confessing the affair to Victor. Torn between her family and her lover, Adele cannot help but choose to stay with her children.
Humphreys follows the two parted lovers to the end of their lives, as they grow old and stout but never entirely let go of their love for one another, and then on beyond Adele’s death to the tragic legacy of their affair; the fate of her youngest daughter Dede.
I don’t know enough about Victor Hugo and Sainte-Beuve to see exactly where the line between truth and fiction is drawn but the bare facts of this tragic and bizarre story are certainly true. Humphreys spent five long years researching and writing the novel - Saint-Beuve helping the process by obligingly writing and publishing the story of his affair shortly after it ended. Perhaps inevitably the tale is skewed in his favour. Victor Hugo is shown as the stereotypical creative type: a terrible husband, self-centred, with a monstrous ego, while Charles is seen as hostage to his emotions and the victim of his condition.
Novels like this one rescue people from being lost in history. How many of us today have heard of Sainte-Beuve or continue to read Hugo’s work? Who knew of Adele or the fate of her daughters? Humphreys breathes new life into all of them, writing with great sensitivity, thoughtfulness and a wry tone at times.
There is a lot going on in what is a fairly slim novel: madness, confused sexuality, revolution, love and loss. But it is beautifully paced, elegantly written and compelling from start to finish. There will be rich pickings here for book clubs.
Footnote:

Nicky Pellegrino, (right NZH photo), a succcesful Auckland-based author of popular fiction is also the Books Editor of the Herald on Sunday where the above piece was first published on 23 October, 2011, as was the Booklover piece below.
Booklover
British novelist Tasmina Perry is the author of Private Lives (Headline, $34.99)

The book I love most is…I Capture the Castle by Dodie Smith. It's a magical, bittersweet coming of age story that I can read again and again. Cassandra Mortmain is one of the quirkiest and most charming narrators in literature and the whole book has a delicious English eccentricity about it that I love.

The book I’m reading right now is...Absolute Power by David Baldacci. I bought a bag of novels by American thriller writers that I haven't tried before - like Baldacci, Tess Gerristen and Brad Meltzer that are perfect for taking on holiday.

The book I'd like to read next is...The Language Of Flowers by Vanessa Diffenbaugh, a debut novel about a young woman whose gift for flowers helps change the lives of the people around her.

My favourite bookshop is...Barts Bookstore in Ojai, California.
I discovered this place when I did a home exchange on America's west coast a couple of years ago. It's an outdoor bookshop built around a huge tree in the middle of Ojai with lots of quiet nooks stuffed with used books and rare first editions. There's a little stall to buy lemonade or coffee and when it's closed you can take books from a shelf outside and leave your money in an honesty box.

The book that changed me was… my first novel Daddy's Girls. I didn't expect it to be as popular as it was but when it went into the top ten bestsellers list in England it gave me the confidence to give up my career as a journalist and write full-time.
The book I wish I never read is…I don't really regret reading any book. If it hasn't grabbed me by the first three or four chapters I just move on so I don't waste too much time on something I'm not enjoying.
Posted by Beattie's Book Blog at 2:49 pm

I can't rate Helen Humphreys highly enough, and I hope more Kiwis will read her work. At the Vancouver Int. Writers and Readers Festival recently she read a wonderful passage from The Reinvention of Love in which a rejected poet challenges Sainte-Beuve to a duel, shouting "Choose your weapon." Sainte-Beuve stares him down: "I choose spelling. You're dead."