Janet Frame - In Her Own Words 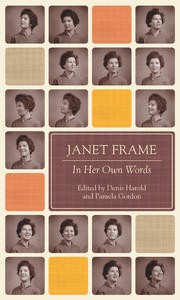 The publishers have kindly agreed to allow me to reproduce both the Preface from the book and an excerpt.
Preface: Frame Unframed
Our aim in this book is to allow Janet Frame to speak for herself about herself and her life and work, and about the world around her and the world beyond. As with all well known identities who did not court publicity, stubborn myths built up around her, some through a natural human process — the need for a satisfying coherent story, the
urge to stereotype and label; some through the publicity machines of her own publishers; some through the processes of malicious or bignoting gossip. And some, of course — like the myth of the ‘hermit’ — she either contributed to or did not actively discourage, as the legend ensured she was left in privacy to live her life and do her work.
Our hope is that this collection of her non-fiction writings and speeches and quotations from interviews will challenge the many inaccuracies about Janet Frame that are disseminated even by apparently reliable sources. Frame’s biographer Michael King identified multiple errors in the essay on Frame included in the 1998 Companion to Literature. An approach of biographical speculation towards Frame’s work has been doggedly influential — in at least — and it has set the tone for a patronising attitude and a pathologising discourse.
Some say, well, if Frame created a vacuum by not speaking about herself, then of course the mythmakers will fill it with their inventions. And in her lifetime she did accept some of the blame for the misinformation; she especially regretted her early essay ‘Beginnings’, which was seized upon by certain scholars as holy writ and has subsequently been preferred by them to every significant statement Frame
later made that contradicted it, including when she admitted to ‘exaggerating’ in the essay in order to gain sympathy and financial support.
Even Frame’s award-winning and bestselling autobiographical trilogy, published in the 1980s, has failed to shift many of the myths that she was attempting to quell by that exercise. Partly, of course, this is due to the fact that the memoir was so soon adapted for the celebrated 1990 Jane Campion movie An Angel at My Table; and in the process Frame’s story was fictionalised and mixed with passages from her early novels. The striking visual images from the film have been effective in shoring up a view of Janet Frame that is not the Janet Frame whose voice you will hear in this volume.
We hope that this book does away with the firmly held popular belief that ‘she never spoke publicly about her work’ (a claim that is emblazoned on the cover blurb of the DVD of Wrestling with the Angel:Janet Frame, a television documentary on Frame that was released soon after her death). Frame speaks for herself here, generously, and
surprisingly often. In the interview section we have extracted her direct speech from the surrounding text as much as possible, so that she can speak without being interpreted by the journalist. For the sake of coherence we have provided concise paraphrases of the context.
This volume offers as full a record as we have been able to bring together only seven years after Janet Frame’s death. There are doubtless many more treasures of her non-fiction to be discovered in the future. We know that she gave more speeches and interviews and made more public appearances and wrote more letters to the editor
than are documented here. For the moment, however, we feel the time is right to publish this important collection, and we are confident that it is representative of the face she did actually show to the world,despite all rumours to the contrary.
We are aware of the irony of our title Janet Frame In Her Own Words being cast in the dreaded third person – that linguistic tool she identified as so often used to oppress or negate. It’s a paradox we think Janet Frame herself would have appreciated. We can only declare our agenda: to let Janet Frame speak for herself, ‘in the first person’. We
are grateful to her for entrusting us with this responsibility.
Pamela Gordon
Trustee
Janet Frame Literary Trust
1981 COUNTING THE HUMAN COST


Last evening as I went to my gate to collect the milk I was surprised to see an elderly man walking by, playing a guitar and singing to thetune of ‘The Foggy Foggy Dew’.‘Where are you going, pray, and what are you singing?’ I asked.(I used the word pray not archaically but with some present hope).I was further surprised when the elderly man explained that he was on his way to Menton in the South of France to visit the grave.(Menton, you will remember, is where Katherine Mansfi eld once lived, but, more importantly, it is where the founder of football is buried.)
The man explained that as he travelled he was singing his song throughout the world, and I who value the dignity and reputation of my country, asked for a copy of the song which the man gently, considerately, smilingly, gave me.
He then continued on his way, playing the guitar, singing,disrupting the peace a little, but of course he was free to do so because we value freedom in our country.
I give you the words of the song:
My name is Footy Pool, of I’m the fount,
I’m a faithful son.
I have so many freedoms, far too many to count,
responsibilities I have none.
I’ve heard of Laura Biding, a citizen of pearl
who lives in our fair land,
of her sister Laura Norder, a strictly kept girl
(who’s very heavily manned!)
She dallies with the Army and with the Navy too,
they say her fate is sealed
but I am not alarmed to think she might be harmed
when they get her on the muddy muddy field.
You may say that I would rule in this fair land
that it’s power I seek to gain,
with government by foot and batonned hand
instead of by heart and brain,
but I am only an ordinary bloke
more ordinary than most
my freedom is such that I am not really free
to count the human cost.
I repeat that I’m only an ordinary bloke
and I wouldn’t ask for more
so please don’t give to me responsibility,
give me only the score.
JANET FRAME
Footnote:
This is a very special, small hardback book, it is full of treasures, it will be a joy to dip into and I am delighted to have it on my bedside table for that purpose.
Janet Frame - In her own words

Posted by Beattie's Book Blog at 6:20 am