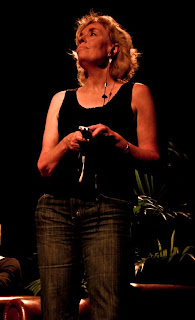 A really good day in Michele Leggott's life is when she doesn't have to think about going blind.
Olive, "a big drippy golden retriever with a look of 'hi everybody' on her face", makes that happen.
Poet laureate and University of Auckland academic, Leggott's degenerative eye disease, retinitis pigmentosa, is rapidly taking her sight.(Photo right by Gil Hanly).
She thought for a while she could cope with a white stick.
"For years, I used to say you cannot fold up a dog."
But then there was a "click over moment" going up Shortland Street toward university.
"I was thinking, oh god, it would be so much easier if I could take my husband, and I felt then I needed a dog, another sentient being," she says in her Devonport home.
"I was losing independence because I was using my white stick."
It took nearly a year from applying to the Royal New Zealand Foundation of the Blind for a guide dog before she was teamed up with Olive, a golden retriever.
Her arrival coincided with the Pike River mine disaster: "The day of the explosion they postpone her arrival."
Olive transformed life.
The training was a lot like Plunket gives new mothers.
"You start from absolute scratch and they do it day by day."
A trainer with a lead on the dog shared it, until, one day, he quietly slipped his lead off. It was like a dad letting go the bike carrier when teaching a child to ride.
"They hand over fully trained Rolls Royce dogs to some one who cannot drive them," she says,
Full story at stuff.co.nz
Posted by Beattie's Book Blog at 10:05 am