A second Rugby World Cup title is announced, this one by respected author/commentator Bob Howitt.

Black: Where it belongs
by Bob Howitt
RRP $24.99
In-store nationwide by the end of this month! 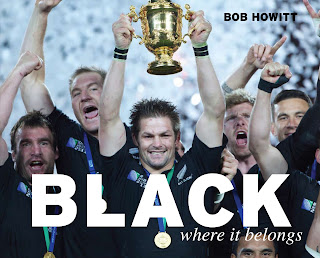 The must-have review and record of the 2011 rugby tournament. One of rugby's most respected commentators, Bob Howitt, provides definitive commentary to a stunning array of full colour photographs taken during the course of the rugby news event that grabbed the world’s attention.
This highly illustrated, comprehensive 136-page review package includes:
·        Introduction to the 2011 tournament
·        Pool Games: detailed review of each New Zealand game in Pool A, along with statistics and a review of Pool A in its entirety, and statistics and reviews of Pools  B, C and D
·        Quarter-finals — review of each quarter-final game
·        Semi-finals — review of each semi-final game
·        Bronze Final — review of the Wales v Australia playoff
·        The Final — review of the New Zealand v France Final and the All Blacks receiving the Webb Ellis Cup, including a critique of Graham Henry’s coaching career and accompanying statistical survey
·        Players of the  Tournament — the top six performers of the 2011 tournament
·        Tournament XV — the dream team emerging from the tournament’s top performers
·        Statistics — wrap-up of the key match and tournament stats.
Top-class action photographs of the games as they unfold, and a selection of colourful spectator photos from around the venues, the opening ceremony, and a shot from the ticker-tape parade in Auckland the day after the Final.
Bob Howitt has spent a lifetime studying and writing about rugby. Auckland Star correspondent for a decade, editor of the iconic Rugby News and its annuals for 25 years, and founder editor of NZ Rugby World magazine. In addition to his long journalism career, he has published 19 books and remains a sought-after commentator in the media on sporting news and events. A long-serving member of the New Zealand Sports Journalists Association, Bob is a past winner of the New Zealand Sports Journalist of the Year award.
Posted by Beattie's Book Blog at 2:33 pm