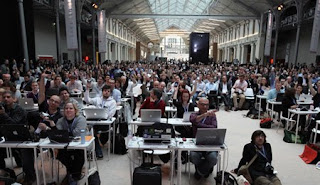 S: Last week's LeWeb, the largest technology conference in Europe, attracted nearly nearly 2,400 attendees from 50 countries. Started in 2005 by Loic Le Meur (founder and CEO of Seesmic) and his wife Geraldine, it has become perhaps the premier Internet related conference in Europe and a key venue for the launch of new products and initiatives from companies. Attendees represented a diversity of companies, from mobile carriers and device makers, to social media networks, small startups, and search providers - but very few from the publishing community. Why is that?
(read on ...)

mentioned in today's lead article, author Timothy Ferris, author of The 4-Hour Workweek, gave a presentation at LeWeb about how his personal marketing efforts with online tools and social media put his book onto national bestseller lists, while his publisher's efforts with traditional media were less effective.

Yesterday, Seth Godin released a free e-book online, and Steven Covey announced that he will give Amazon exclusive rights to his e-books for a year. More often, well-known authors are sidestepping the traditional path to getting published.