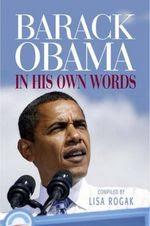 ACK OBAMA IN HIS OWN WORDS
Compiled by Lisa Rogak JR Books (Bookwise) - NZ$24.95
Barack Obama in His Own Words is a book of quotes from the former Illinois Senator, now President, that allows those who aren't as familiar with his politics to learn quickly where he stands on abortion, religion, AIDS, his critics, foreign policy, Iraq, the War on Terror, unemployment, gay marriage, and a host of other important issues facing America and the world.

Informative and easy to read, this is something of a potted history for those who don't have time to read the biography of America's first Black President. It is also an impressive range of quotes mostly since 2004 but some going back 15 years.

'When I sit down at night with my six year old and my three year old at night and I'm reading a story to them and then I tiuck them in to go to sleep, that's alittle piece of heaven that I hang onto'.

'I wouldn't run if I didn't think I could win.'
'I don't want people to pretend I'm not black or that it's somehow not relevant.'

I admire this man and have added with great pleasure this collection of his quotes to my quite extensive library of books of quotations.
Posted by Beattie's Book Blog at 4:24 pm