At 7.30am this morning I opened the door of my daughter's Manhattan apartment and picked up the weekend edition of The New York Times. Were I to have read it all it would have taken all day, what a whopper.
I started, of courswe, with the Book Review section and read the lead story on Patricia Highsmith which follows:

Patricia Highsmith said of herself, “I am always in love. . . .” Yet at her memorial service in Tegna, Switzerland, in 1995, there were no lovers from the past, and there was no lover to mourn her in the present. The service was filmed, which Highsmith would have liked, because although reclusive, she was interested in posterity. Such display also allowed Highsmith to hide in plain sight (as her hero Edgar Allan Poe put it in “The Purloined Letter”) the fact that all her relationships had failed. Highsmith had died in a hospital alone, and the last person to see her was her accountant. Highsmith was obsessed with taxes.

Right - Illustration by Lutz Widmaier, based on a photograph by F. J. Goodman 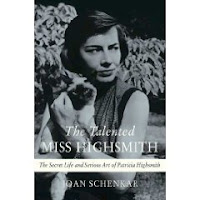 icia Highsmith in New York in the 1940s.
There had been so many lovers, usually women, but men, too, including Arthur Koestler, who had the good sense to give up. Highsmith was attractive to men and to women, until her diet of alcohol and cigarettes (she hated food) raddled her beauty.
Men never fired her imagination, except in her fiction, where her males, especially Tom Ripley, are versions of herself. It was women she wanted, and she found them in bars, on boats, at parties and, best of all, in settled relationships with other people.

Highsmith loved a triangle, and she liked to destroy it, axing the part of the couple she didn’t want, but usually sleeping with her first. Hers was a life jammed with encounters, and it is not by chance that her novels obsessively use the unexpected life-changing/life-threatening encounter as the drive into the narrative — think “Strangers on a Train” or any of the Ripley series.

Highsmith’s one explicitly homosexual novel, “The Price of Salt,” uses the spring of a particular encounter that the writer never forgot. As a young woman in New York City, Highsmith was working in the toy department of Bloomingdale’s earning Christmas cash when a wealthy Venus in furs — older, handsome — came in to order a doll. Simultaneously falling in love and falling ill with a fever, Highsmith went home in a daze and plotted the whole scenario for her novel — and even dared to give it something like a happy ending. What she didn’t dare to do was publish it under her own name.

But this was the 1950s, and homosexuality was classified as a disease and a disorder. Highsmith’s Freudian therapy had been aimed exclusively at “curing” her, though, bizarrely, she was offered a support group with other women, mostly married, who had homosexual tendencies. Highsmith thought she might seduce a couple, and as her lover at the time observed, “better latent than never.”
The full fascinating piece at NYT.
Posted by Beattie's Book Blog at 6:42 am