Geoff Dyer and Jake Arnott also among those frequenting authors' evenings in London
Gareth Rubin in The Observer, Sunday 20 December 2009 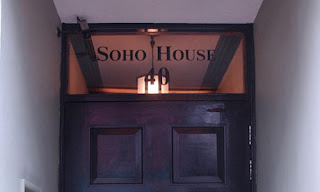 multaneously the atmosphere of a library, a bordello and a boxing ring' ... the literary salon. Photograph: Toby Melville/PA

The literary salon, the 18th-century gathering where intellectual giants would debate and inspire or infuriate each other, has been reborn for the 21st century with new salons appearing throughout the country. But those attending are as likely to be drawn from the ranks of edgy younger writers as from the famous.

During the Enlightenment, salons established by charismatic individuals allowed the great talents of the age to discuss their writing – creating the work and ideas that changed the course of Britain's artistic history. Many classic works would never have appeared without the semi-public gatherings. Now there are meetings once again, so members can engage in unashamedly intelligent discourse and read unfinished work to gauge reaction before redrafting.

In London, the private members' club Soho House has established a monthly salon,where some of the country's foremost authors and those aiming for future fame read – and discuss – their writing with the public. Next month's attendees include Louis de Bernières, author of Captain Corelli's Mandolin, and Naomi Alderman, who won the Orange award for her debut, Disobedience, a controversial novel about an Orthodox rabbi's daughter who becomes a lesbian. Those present previously include Jake Arnott, author of East End crime novel The Long Firm, which became a BBC series, chick-lit author Jenny Colgan, and Geoff Dyer, who won the Somerset Maugham award for his book about jazz, But Beautiful.

The group was established by the playwright Damian Barr, who felt there was a need for a space for writers and book lovers to discuss, inspire, goad or cajole each other as they did in the salons of past eras. "It's an Enlightenment idea. You can talk to people, flirt, get drunk and still feel you've done something meaningful," said Barr, adding that the salon was a modern twist on the 18th-century model.

The full story at The Observer online.
Posted by Beattie's Book Blog at 11:48 am

Could you imagine a NZ version?

Gareth Rubin’s article interested me as well [but can’t find any way to e-mail him directly!]
My academic research was on early 20th century writers’ salons—W B Yeats and friends who founded the Abbey Theatre, the Bloomsbury group, the Americans in Paris, and the Algonquin Round Table.
For the most part, they were ‘edgy younger writers’ at the time. Their groups were much more informal than the ones described in the Observer article—basically they ‘hung out.’ They did share pieces they were working on, but mostly they talked, and fought, and gossiped. And in the case of the Bloomsberries, slept with each other. And in the case of the Americans, got drunk together.
My blog about them, ‘Such Friends,’ is updated daily with what they were doing on this date, and monthly with their activities one hundred years before: www.suchfriends.wordpress.com.
The comments on Rubin’s article make it clear that there are still groups like these writers’ salons all over. Who knows what groundbreaking literature of the 21st century is bubbling up there now?!