Three Hollywood legends — actually four if you count the publicist involved, the venerable Pat Kingsley — are working to bring Philip Roth’s most recent novel to the multiplex. Al Pacino has bought the movie rights to “The Humbling,” about an aging and irrelevant stage actor who finds hope of renewal through a younger woman. Mr. Pacino, who has never optioned a book before, will play the lead, according to Ms. Kingsley. In the director’s chair, she said, will be Barry Levinson, who won an Oscar for “Rain Man” and was nominated for “Bugsy.” (More recently, he has been producing television, 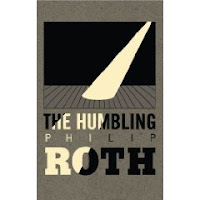 including the gritty HBO prison series “Oz.”) Buck Henry, who just turned 79, is writing the screenplay, Ms. Kingsley said. Among Mr. Henry’s writing credits are “The Graduate,” the original “Get Smart” television series and to “To Die For,” which starred Nicole Kidman.

“The book is perfect for him” — Mr. Pacino — “because he has a love of the stage and, although he has never personally experienced these feelings, he understands them,” Ms. Kingsley said. No studio is involved yet. Although “The Humbling” received mixed critical notices, Mr. Roth has won pretty much every writing honor available (except the Nobel Prize), including the National Book Award — twice — and a Pulitzer Prize.
Posted by Beattie's Book Blog at 6:02 am