RIS — A French court ruled on Friday that Google infringed copyrights by digitizing books and putting extracts online without authorization, dealing a setback to its embattled book project. 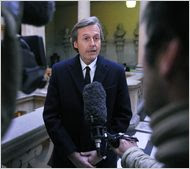 Yann Colin, a lawyer for La Martinière, a publishing group, welcomed the decision whether the company would immediately remove the excerpts or pay the fine; Google’s lawyers were still examining the ruling. He also said there would be no impact on Google’s settlement with publishers and authors in the United States, an agreement that would allow the company the right to digitize, catalog and sell millions of books online that are under copyright protection.
and said he hoped for higher fines.
The court in Paris ruled against Google after a publishing group, La Martinière, backed by publishers and authors, argued that the industry was being exploited by Google’s Book Search program, which was started in 2005.
The court ordered Google to pay over 300,000 euros, or $430,000, in damages and interest and to stop digital reproduction of the material. The company was also ordered to pay 10,000 euros a day in fines until it removed extracts of some French books from its online database.
Google said it believed that it had complied with French copyright law and that it planned to appeal the decision.
“We believe that displaying a limited number of short extracts from books complies with copyright legislation both in France and the U.S. — and improves access to books,” said Philippe Colombet, who is responsible for Google’s books partnership in France.
The full story at NYT.

Posted by Beattie's Book Blog at 7:22 am