Joel and Ethan Coen’s 1998 movie, “The Big Lebowski,” which stars Jeff Bridges as a beatific, pot-smoking, bowling-obsessed slacker known as the Dude, snuck up on the English-speaking world during the ’00s: it became, stealthily, the decade’s most venerated cult film. It’s got that elusive and addictive quality that a great midnight movie has to have: it blissfully widens and expands in your mind upon repeat viewings.

Pic left - Merrick Morton/Gramercy Pictures
Jeff Bridges, left, and John Goodman in “The Big Lebowski.”
"It's fine to have classes and books about The Dude since, arguably, there are some things about human life that it treats that Shakespeare doesn't."

“The Big Lebowski” has spawned its own shaggy, fervid world: drinking games, Halloween costumes, bumper stickers (“This aggression will not stand, man”) and a drunken annual festival that took root in Louisville, Ky., and has spread to other cities. The movie is also the subject of an expanding shelf of books, including “The Dude Abides: The Gospel According to the Coen Brothers” and the forthcoming “The Tao of the Dude.” 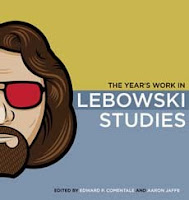 re cult films go, academics will follow. New in bookstores, and already in its second printing, is “The Year’s Work in Lebowski Studies,” an essay collection edited by Edward P. Comentale and Aaron Jaffe (Indiana University Press, $24.95).
The book is, like the Dude himself, a little rough around the edges. But it’s worth an end-of-the-year holiday pop-in. Ideally you’d read it with a White Russian — the Dude’s cocktail of choice — in hand.

More than a few of this book’s essay titles will make you groan and laugh out loud at the same time (“ ‘The Big Lebowski’ and Paul de Man: Historicizing Irony and Ironizing Historicism”). But just as often, the writing here is a bit like the film: amiable, laid-back and possessed of a wobbly Zen-acuity.

In one essay Fred Ashe — he is an associate professor of English at Birmingham-Southern College — profitably compares the Dude to Rip van Winkle, for both his “friendly charisma” and what Washington Irving described as Rip’s “insuperable aversion to all kinds of profitable labor.” Both men, Mr. Ashe notes, expose “the sickness of a straight society premised on the Puritan work ethic.”

In another, “On the White Russian,” Craig N. Owens — he teaches literature and writing at Drake University in Des Moines — divides the world into two factions: those who float the cream on their White Russians (“the floaters”) and those who mix it in (“the homogenizers”). He praises the Dude’s “middle way,” avoiding the hassle of “shaking and straining.”

Read Dwight Garner's full story plus a 1998 review of the movie at NYT.
Footnote:
The Bookman owns the CD of the soundtrack which can often be heard playing in his office.
Posted by Beattie's Book Blog at 9:52 am