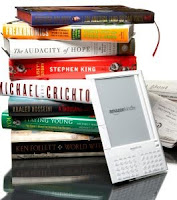 E-Book Piracy: The Publishing Industry's Next Epic Saga? With the rise of e-book readers like the Kindle, Sony Reader, and Nook comes the scourge of the digital world: pirates.

As e-readers such as the Amazon Kindle continue to rise, so follows the publishing industry's worst nightmare: e-book piracy. For years e-book piracy was the exclusive province of the determined few willing to ferret out mostly nerdy textbook titles from the Internet's dark alleys and read them on their PC. But publishers say that the problem is ballooning as e-readers grow in popularity and the appetite for mainstream e-books grows.

"We are now seeing large volumes of e-books being pirated on everything from file-sharing networks to Websites," says Ed McCoyd of the Association of American Publishers, a trade organization representing major U.S. book publishers. The year-to-year percentage growth of available e-book titles is unknown, McCoyd says. Other publishers, such as Hachette Book Group, say that e-book piracy has grown "exponentially" over the past year.

The availability of best sellers is just the start. PCWorld discovered virtual bookshelves stuffed with pirated e-book titles ranging from copyrighted popular fiction and nonfiction titles to college textbooks and how-to e-books. All of these titles are downloadable and ready for viewing on your e-reader of choice, be it the Amazon Kindle, Sony Reader, or Barnes & Noble Nook.

"We know e-book piracy is a problem, and we are taking the issue very seriously," says Paul Aiken, executive director of The Authors Guild, an advocacy group for writers. "We've seen the music and film industry deal with this, and it stands to reason we will grapple with it too." Aiken says that while he is concerned about the growth in the availability of e-book titles on the Internet, he is not convinced that the number of people who are actually downloading the digital files is increasing as rapidly.

Compared with music piracy, illicit e-books are not nearly as widespread or as easy to acquire. Pirates must be determined to track down specific e-book titles. Pirated e-book files (usually available as PDFs) can sometimes be poorly reproduced, and are sometimes made up of scanned page images--not text.
The full piece at PC World online.
Posted by Beattie's Book Blog at 5:20 am

I hope the piracy and author remuneration issues with ebooks can be resolved, as they are the future, and the first real ray of hope for authors', as ebooks are the growth market, something reading has not had for a long time.

It looks like tipping point has been reached with this press release from Amazon:

Amazon.com, Inc. (NASDAQ:AMZN) today announced that Kindle has become the most gifted item in Amazon's history. On Christmas Day, for the first time ever, customers purchased more Kindle books than physical books..

(Mind you, looking like Kindles are something NZ readers will continue to not have a for a long time.)

I'm pleased to see that the Author's Guild recognises that the availability of pirate copies doesn't translate directly into people downloading them. I think it is an issue that is understated, particularly as downloading an ebook is far different from downloading an mp3. The industry cites the availability of pirate copies as an inhibitor to growth in ebooks, which is either a genuinely held belief or a convenient excuse to drag the chain. What does the customer want?