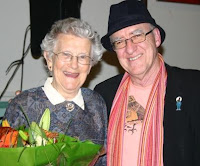 old friend Dorothy has dropped me a note, (she is the only person who still writes me proper letters!), to tell me that The Children's Bookshop in Auckland's Ponsonby is now trading as The Dorothy Butler Children's Bookshop and that she is “childishly delighted”.
Pic left Dorothy & The Bookman at the launch of Dorothy's autobiography earlier this year.

Mary Sangster of The Children's Bookshop tells me that they quietly changed the name at the beginning of November and that the signage was changed at the same time. She said "it is interesting, no-one has noticed, in that the customers and locals thought of it as that anyway, so to them, nothing has changed".

Sangster went on to say that they decided to make the name change for a couple of reasons.

October 31, marked 10 years since Sheila Sinclair and Kath Crabb purchased the shop off Glen Rees after the death of his wife Heather. At the time there were a couple of tiny things that we wanted to disassociate from, so, with Dorothy's approval we changed the name from The Dorothy Butler Bookshop to The Children's Bookshop (thus bringing ourAuckland and Christchurch shops into line.)
Having created our own identity and management style, we now felt that it was appropriate this year to both celebrate our first decade in Auckland and pay tribute to a wonderful lady, author, bookseller and champion of children's literature, by changing the name of the shop to The Dorothy Butler Children's Bookshop (an almagation of the old and new names).

2009 was also appropriate as the second part of Dorothy's

autobiography, All this and a Bookshop too, was launched earlier in the year at Auckland Girls Grammar School and we were pleased to be involved. Dorothy moved the shop from Sunnybrae Rd to the present location at Three Lamps in 1985. She sold it to Glen and Heather Rees and "retired" in 1990 and The Children's Bookshop Ltd purchased it on October 31, 1999. We shut it for a week and redecorated etc and reopened for trading on November 5, 1999.

The Bookman is delighted with this development and compliments Mary Sangster and her colleagues on their decision.
Dorothy Butler is the grande dame of children's bookselling in NZ and has arguably done more for the cause of children's reading than anyone else in my lifetime.To have her name returned to this wonderful children's bookstore that she founded seems eminently appropriate all round.
Posted by Beattie's Book Blog at 6:16 am

Give me your address and I'll send you a proper letter too!