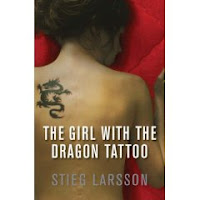 Girl With The Dragon Tattoo to become Hollywood film
The best-selling novels of Stieg Larsson, the Swedish crime writer, are to be turned into a Hollywood film franchise.
By Anita Singh, Showbusiness Editor, The Telegraph, 17 December

Sony Pictures is planning to bring Larsson's Millennium series to the screen, beginning with The Girl With The Dragon Tattoo. The Girl Who Played With Fire and The Girl Who Kicked the Hornets' Nest complete the trilogy.

The heroine of the books is Lisbeth Salander, a delinquent computer hacker with a photographic memory, who joins forces with investigative journalist Mikael Blomkvist to solve crimes.

The Girl With The Dragon Tattoo has already been turned into a Swedish language film, which has taken more than $100 million in Europe. Swedish actress Noomi Rapace played the lead role, but she is likely to be replaced by a well-known Hollywood actress when the movies are remade. Kristen Stewart, the young star of the Twilight films, has been linked to the role.

Steven Zaillian, the Oscar-winning writer of Schindler's List, is in talks to adapt Larsson's books and they will be produced by Doug Belgrad, who described the series as "nothing short of amazing. The novels are very cinematically told, with fantastic characters and page-turning plots."
Negotiations to option the rights are in their final stages.

Larsson, a journalist and political activist, died suddenly of a heart attack in 2004 at the age of 50, before seeing his first volume in print.

The Girl With The Dragon Tattoo was published a few months later and became an instant success.

His global sales have topped 23 million and last year Larsson was the second-best-selling author in the world after Khaled Hosseini.

A row has broken out in Sweden over the proceeds from the sale of his books, which are thought to total £20 million. Larsson was not married to his partner of 32 years, Eva Gabrielsson, and died without making a will, so the proceeds defaulted to his family.
Posted by Beattie's Book Blog at 7:06 am