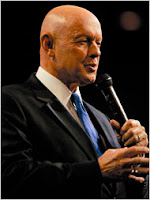 Ever since electronic books emerged as a major growth market, New York’s largest publishing houses have worried that big-name authors might sign deals directly with e-book retailers or other new ventures, bypassing traditional publishers entirely.
Now, one well-known author is doing just that.

Stephen R. Covey, one of the most successful business authors of the last two decades, has moved e-book rights for two of his best-selling books from his print publisher, Simon & Schuster, a division of the CBS Corporation, to a digital publisher that will sell the e-books to Amazon.com for one year.

Amazon, maker of the popular Kindle e-reader and one of the biggest book retailers in the country, will have the exclusive rights to sell electronic editions of “The 7 Habits of Highly Effective People,” and a later work, “Principle-Centered Leadership.” Mr. Covey also plans to gradually make other e-books available exclusively to Amazon, which will promote them on its Web site.

The move promises to raise the already high anxiety level among publishers about the economics of digital publishing and could offer authors a way to earn more profits from their works than they do under the traditional system.

Mr. Covey is making his books available to Amazon through RosettaBooks, an electronic book publisher that primarily traffics in the older works of authors like Kurt Vonnegut and Virginia Woolf.
Read the full piece at NYT.
Posted by Beattie's Book Blog at 6:45 am

Im not sure how I feel about this ebook revolution. I definitely read ebooks on my iphone. I always like to have a book with me at all times, and it means that i don't have the ability to carry one with me, i can always get out my phone and read one there.

Still, call me traditional, but its just not the same as opening a book and turning the pages and feeling really a part of it. The experience isn't the same.

Im not so sure that I like the idea of authors publishing straight to ebook format without a 'proper' book being available aswell. What about us traditionalists?

I don't read a lot of non-fiction, but with fiction especially I think a lot is lost with the ebook format and I would definitely hate to see authors of fiction moving only to publishing as ebooks.