Jamie Oliver's head of wine Matt Skinner has admitted to not tasting several wines that he recommends in his latest book.

In The Juice 2010, published by Mitchell Beazley in the UK, Skinner lists New World wines from the 2009 vintage that were not bottled until months after the last deadline for the book.

Skinner, who is group wine manager for TV chef Jamie Oliver's Fifteen restaurant in Melbourne, was originally criticised by 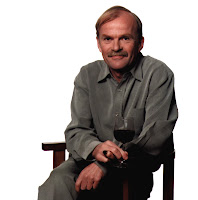 New Zealand wine writer Michael Cooper (pic right) in The Listener magazine.
Cooper claimed that Skinner could not have recommended a New Zealand wine months ahead of publication, before Cooper himself had even tasted it.

In a statement sent to decanter.com Skinner said, 'It is imperative that I taste all the wines that I recommend.

'However there are some releases that are consistent from year to year, and as popular, good value and accessible wines I want to include them because I know that my readers will appreciate them.

'In order to do so I include non-specific tasting notes based on the current and previous year's vintage, focusing more on basic flavours and compatibility with food.'

There is no indication in the text that these notes are non-specific. The entry for the Vasse Felix Semillon Sauvignon Blanc from Margaret River, priced at £11.99, reads, '…the palate is fresh as a daisy and puncuated by the kind of lip-smacking acidity that makes this wine almost impossible to put down.'

Skinner's tasting notes are submitted every January, with a final revision date in May, before publication in October of the same year. Most of the wines in question are not bottled, or shown for tasting, until June or July.

Hilary Lumsden, Mitchell Beazley commissioning editor, said, 'For our first edition, in 2006, the feedback we got was that by the time people went out and bought the book, the wines were already off the shelves, so the book was effectively out of date.

'We either upset one side or the other. There's the side that wants the most up-to-date information, and there's Michael Cooper's side. The majority of the wines in The Juice don't rely on vintage variation. A lot of them are going to be consistent each vintage.'
Read the full piece at Decanter online.
Posted by Beattie's Book Blog at 12:21 pm