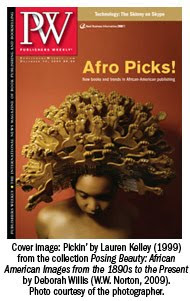 It didn’t take long before complaints began to circulate on Twitter about the image used on the cover of this week’s Publishers Weekly to illustrate the annual feature on African-American book publishing.

“We don't get the 'Afro Picks!' cover. It's not hip, cute, or appealing,” said one tweet. Another tweet: “It seems like a big mistake,” while another read, “what exactly is the rationale behind the Afro-picks cover?” “This is a ridiculous cover. An afro with lotso picks. Get it?” “Publishers Weekly what were you thinking?” By early afternoon on Monday, Twitter was swarming with comments about the cover illustration and few of the comments were complimentary.

The image was a photograph taken from a new book from W.W. Norton, Posing Bea 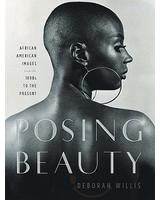 uty: African American Images from the 1890s to the Present by Deborah Willis, a collection of carefully chosen photographs intended to highlight the physical and cultural beauty of African-American life. The image (Pickin', 1999) by Lauren Kelley is a photograph of a black woman whose hair is full of Afro picks, the ubiquitous metal toothed hair-comb of the 1970s, complete with plastic handle in the form of a black power fist. The afro picks are arrayed in the woman’s hair to create a kind of giant sculptural Afro hair-do and the woman is leaning slightly forward to give the viewer a better look at the quirky artificially created hair-pick crown. The coverline for the image is: Afro Picks! New Books and Trends in African-American Publishing and it refers to the feature story “African-American Books in Today’s Marketplace,” a look at the current marketplace for black books written by Felicia Pride.

The resulting response to the choice of that particular image and that coverline was not anticipated by the person most closely involved with this week’s cover. That person was me, PW senior news editor, Calvin Reid. I organize, edit, and oversee the annual feature story on black books. I chose the cover in collaboration with the magazine's creative director and I wrote the coverline, Afro Picks!, which was intended as a pun to highlight a story that “picked” new black titles of interest. The image was reminiscent of the 1970s and appealed to me, someone who grew up in the middle of the 1970s-era wave of black pride, black power and big afros with big afro picks stuck right in the back. To me it is a sweet, tongue-in-cheek funny and striking image of quirky black hair power. And while it never occurred to me that anyone would be offended by these images, I was very wrong and I have to acknowledge that. Quite a few people were offended by it and outraged by what some perceive as a disparaging or degrading image of a black woman. I certainly regret offending anyone and while I still love that image, I intend to think long and hard about whatever image is chosen for next year’s cover.

“My apologies to anyone who was offended by our cover—that certainly wasn’t our intent,” said PW’s editorial director, Brian Kenney. “At the same time, I’m delighted that Publishers Weekly was able to draw so much attention to Lauren Kelley’s powerful photograph, Deborah Willis’s wonderful book, and especially Felicia Pride’s absolutely terrific feature on African-American book publishing.”
Read the full stroy at PW.
Posted by Beattie's Book Blog at 5:55 am