What's the point of blurbs?
A clutch of hackneyed jingles about how marvellous the author is is de rigueur on book covers – but do they really serve any useful role? 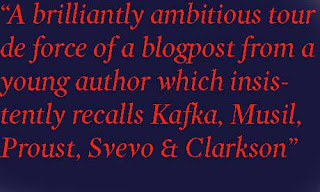 There's a lot of received wisdom in the publishing world – for instance, if you write non-fiction, your book needs a subtitle. Never mind that fiction doesn't require that extra bit of explication (Crime & Punishment: Murder and Redemption in the Empire of the Tsars anyone?) if you write non-fiction you simply must spell out what you're up to for prospective readers! This may be a wise policy or it may be nonsense, nobody knows.

Then there are blurbs, the more of which you can plaster on your paperback the better. Usually these are from newspaper reviews reduced by your sales people to a string of superlatives here, a comparison to somebody more famous than you are there. If the blurb comes from a review by a famous person, then they may just run with the name of the celebrity alone ("The Da Vinci Code is f*cking awesome!" – Salman Rushdie).

Do these blurbs – many of which could be transferred from book to book without great difficulty – actually sway readers? I mean, if you believed them then you'd think every book published is, like, really amazing. Perhaps for an eye glancing across the stacks in Waterstone's, a familiar name (Bill Bryson, say) on an unfamiliar book (Lost Cosmonaut, for instance) might cause the browser to at least pause. A book without blurbs can look fishy – did nobody read it? Is it that bad? On the other hand, Dedalus regularly publishes books with few if any endorsements, but I have faith that they will be superior to 99.9% of the titles which appear slathered in fawning praise.

According to Clive Barker, the quote from Stephen King that graced the covers of the Books of Blood – "I have seen the future of horror and his name is Clive Barker" – ignited both his sales and his career. But Clive Barker's books were something new and exciting in horror; if they hadn't been any good, then the blurb wouldn't have worked. Still, that celebrity endorsement helped steer readers in his direction.

My own publisher once tried something similar, sending a copy of Strange Telescopes to a superstar of travel writing. I was grateful the publisher was thinking about me, the snag was that I couldn't abide the work of the aforementioned superstar, whose unctuous, chucklesome, look-at-me schtick screamed of a craven appeal for approval. I shuddered when sent a mock cover which featured a made-up quote from this literary criminal, but decided to remain silent until the crisis became real, at which point I might have had to perform a hex, or commit ritual seppuku – for rest assured there is no way the publisher would have refused an endorsement no matter how much I argued against it. Fortunately it never materialised: I'd like to think because the celebrity hated my book, but it's more likely that he is bombarded with manuscripts and simply didn't look at it.

… which leads us to another question, never considered by publishers: how many readers reject a book because they loathe the authority endorsing it in a blurb? For example, I can't stand the twee films of Wes Anderson. If he praised a book I probably wouldn't read it. And there are other red flags: it is axiomatic that comparisons to Kafka or Borges will always be made on the most superficial basis, usually by someone who doesn't know much about Kafka or Borges. The same goes for comparisons to Philip K Dick: in my student days I read Jeff Noon's Vurt because it was compared to PKD. But it read less like Ubik than it did a bizarre SF version of one of those tedious features about rave culture that appeared in broadsheets in the 90s. The comparison was based on the presence of imaginary drugs in the plot, and little else.

As a connoisseur of the crap blurb, I recently made an exciting discovery on the back of Andrzej Stasiuk's Fado, which I will cite in full:

"Stasiuk is an accomplished stylist with an eye for the telling detail that brings characters and situations to life … I caught a flavour of Hamsun, Sartre, Genet and Kafka in Stasiuk's scalpel-like but evocative writing."
Irvine Welsh (New York Times)


First we have a dubious authority (Welsh), likely to be as off-putting to some readers as he is attractive to others. Then there is the Kafka reference. Also, considering that Stasiuk is a Pole steeped in central and eastern European culture, it is curious that Welsh "caught" so many purely western European "flavours" (bar the cliché Kafka ref, of course). Any half-informed reader may wonder whether this blurb is even remotely accurate.

I wonder: did Welsh's blurb sell any books? And if so: whose?

Posted by Daniel Kalder Thursday 24 December 2009
Posted by Beattie's Book Blog at 1:56 am