Still Settling the Score, Even Beyond the Grave
By Janet Maslin
Published New York Times: December 13, 2009

When Dominick Dunne died on Aug. 26, an online guest book was set up so well wishers could leave condolence messages for his family. The site assured visitors “that the tears of millions of loyal readers were dried by a sudden wind.” The gust was said to be caused by “the collective sigh of rich and famous bullies on multiple continents” because Mr. Dunne’s nonpareil society-crime reporting and his glaringly fact-based fiction would bedevil them no longer. 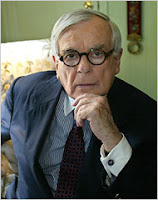 Not so fast, globe-trotting bullies. Mr. Dunne left behind one last, stinging roman à clef. And he most assuredly used it to settle scores.

“Too Much Money” pits his autobiographical character, Gus Bailey, against the New York nouveau riche types of its title. And it keeps Gus constantly aghast at their gall. It commemorates Mr. Dunne’s favorite obsessions — crime, wealth, status, backbiting and power — into a story with a distinctly valedictory flavor, to the point where some of it unfolds at New York’s most elite funeral home. And it includes a line that can serve as Mr. Dunne’s own epitaph, delivered by Gus as a slap to the book’s most moneyed and graceless social climber. She has just made a donation large enough to get her name plastered onto New York’s most important library. Reminding her that libraries exist not just as sites for cocktail parties but as places to house books, Gus tells her: “I don’t have to buy my way in.”

“Too Much Money” takes pains to demonize this woman, using her as a way of focusing attention on Mr. Dunne’s career in journalism. He had long since found the inside track at the trials of O. J. Simpson, the Menendez brothers, Phil Spector, Michael C. Skakel and others, when he zeroed in on Lily Safra, whose financier husband, Edmond, died in Monaco in 1999 in a fire under very peculiar circumstances.

The villainess of “Too Much Money” is a widow named Perla Zacharias, and she bears a strong yet carefully altered resemblance to Ms. Safra: Mr. Dunne learned the hard way, via a slander suit in the Chandra Levy case that left him frightened and distraught, that it’s best to be discreet when flinging incriminating innuendoes. But the character of Perla comes to symbolize all that Mr. Dunne deemed loathsome in his own version of Edith Wharton’s Gilded Age. Mr. Dunne, who earned his place in the social storytelling pantheon as a Truman Capote without the poison, used “Too Much Money” as a soapbox of sorts. Determined to deliver one last cattily entertaining book, he also voiced opinions on topics from Mayor Michael R. Bloomberg’s domestic arrangements (“I like it that the mayor of New York City lives with a beautiful woman who is not his wife”) to more private matters, like Gus’s lifelong determination to keep his homosexuality hidden from his children.

Mr. Dunne’s grievances against Vanity Fair magazine, though settled by the end of the novel, are also included here, as is his contempt for the star-chasing New York attitudes that can extend to and beyond the grave. “Did Xavier embalm that actor in ‘Batman’ who overdosed on prescription drugs?” one character asks about a fluttery assistant at the famous funeral parlor. Another character replies: “That was his day off, and he missed it. He was so disappointed.”
Janet Maslin's full piece at NYT.
Posted by Beattie's Book Blog at 7:02 am