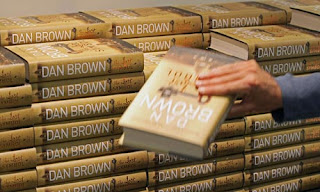 Dan Brown and his debonair professor of "symbology" Robert Langdon have broken the stranglehold that celebrity autobiographies have held over December book sales in recent years to take the Christmas number one slot.

A last minute sales rush propelled Brown's long-awaited novel The Lost Symbol – in which Langdon takes on the Freemasons – to the top of the charts, giving the author his second UK Christmas number one in five years after The Da Vinci Code was the Christmas bestseller in 2004.

Brown just pipped the second-placed Guinness World Records – a perennial Christmas bestseller – to the post with such gems as "'Actually, Katherine, it's not gibberish.' His eyes brightened again with the thrill of discovery. 'It's ... Latin''', and "Is there life after death? Do humans have souls? Incredibly, Katherine had answered all of these questions and more" helping propel him to pole position in the busiest week for book sales.

In recent years celebrity memoirs by the likes of Peter Kay, Russell Brand and Dawn French have dominated the Christmas book charts, which are compiled by book sales monitor Nielsen BookScan. But this year only two celebrity autobiographies – a joint memoir by Ant and Dec, and Frankie Boyle's My Shit Life So Far – scraped into the top 10, in ninth and 10th place respectively.

The public appetite this Christmas was, instead, for fiction, with two titles from Stephenie Meyer's teen vampire series, a new novel from Jodi Picoult and the first title in late Swedish author Stieg Larsson's Millennium trilogy, The Girl with the Dragon Tattoo, all making the top 10 ahead of a host of celebrity autobiographies.

Kay's second volume of memoir, Saturday Night Peter, missed out on the top 10 despite high expectations, as did Jo Brand's autobiography. Memoirs from Sheryl Gascoigne, Justin Lee Collins and Leona Lewis failed to even make the top 100, while Ozzy Osbourne and Jack Dee's contributions both trailed in in the late 80s. In 2005, Osbourne's wife Sharon's autobiography Extreme was one of the bestselling books of the year.

"This year there is very definitely a much stronger end-of-year Christmas fiction market," said André Breedt at Nielsen BookScan. "The autobiography and biography market overall peaked in 2007 [when Brand's My Booky Wook took the number one slot], and ever since then it has been slowing down."

Brown began the autumn as William Hill's favourite at 5/2 to top the Christmas charts, just ahead of Saturday Night Peter at 3/1, but slipped back into fourth place behind Meyer, a festive cookbook from Delia Smith and Guinness World Records as the months progressed.

"We were expecting a victory for Guinness World Records judging on the last couple of weeks of sales," said Jon Howells at Waterstone's. "[But] Dan Brown has broken every record I can think of, and has driven every other book out of its way. [The Lost Symbol] has been a juggernaut of a book. It has taken number one because it's been ubiquitous. People shopping this week and last are the people who are looking for a safe bet, and Dan Brown is a safe bet."

William Hill, which took bets on the number one book, said that Brown was "well backed early on" and that it had "lost a small sum" on his win.

1 The Lost Symbol by Dan Brown

5 The Girl with the Dragon Tattoo by Stieg Larsson

7 Handle With Care by Jodi Picoult

9 Ooh! What a Lovely Pair by Ant and Dec

10 My Shit Life So Far by Frankie Boyle
Posted by Beattie's Book Blog at 2:55 pm

Well that's a depressing list of the books racing off the shelves! I haven't read any of them and don't intend to. Thanks for another year of your marvellous informative blog, Graham, and keep on blogging in 2010. You are a vital part of the NZ writing community and we'd all be lost without you. I hope you and Annie are having a fantastic time in New York. Merry Christmas. X