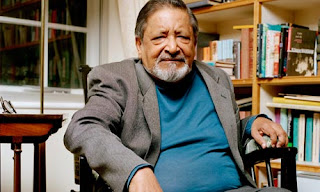 VS Naipaul, no stranger to controversy, has lashed out at female authors, singling out Jane Austen for particular criticism. Photograph: Eamonn McCabe
VS Naipaul, no stranger to literary spats and rows, has done it again. This time, the winner of the Nobel prize for literature has lashed out at female authors, saying there is no woman writer whom he considers his equal – and singling out Jane Austen for particular criticism.
In an interview at the Royal Geographic Society on Tuesday about his career, Naipaul, who has been described as the "greatest living writer of English prose", was asked if he considered any woman writer his literary match. He replied: "I don't think so." Of Austen he said he "couldn't possibly share her sentimental ambitions, her sentimental sense of the world".
He felt that women writers were "quite different". He said: "I read a piece of writing and within a paragraph or two I know whether it is by a woman or not. I think [it is] unequal to me."
The author, who was born in Trinidad, said this was because of women's "sentimentality, the narrow view of the world". "And inevitably for a woman, she is not a complete master of a house, so that comes over in her writing too," he said.

He added: "My publisher, who was so good as a taster and editor, when she became a writer, lo and behold, it was all this feminine tosh. I don't mean this in any unkind way."

The criticism from the author is unsurprising. Naipaul is no stranger to criticism. In the past Naipaul has criticised India's top female authors for their "banality" on the topic he is best known for writing about, the legacy of British colonialism.

He also had a long-running feud with US travel writer and author Paul Theroux.
Their 30-year friendship came to a sudden end, after Theroux discovered that a book he gave Naipaul had been put on sale for £916. The comments were dismissed by the Writers Guild of Great Britain, which said it would not "waste its breath on them".
Literary journalist Alex Clark said: "Is he really saying that writers such as Hilary Mantel, AS Byatt, Iris Murdoch are sentimental or write feminine tosh?"
Literary critic Helen Brown described them as "arrogant, attention-seeking".He should heed the words of George Eliot – a female writer – whose works have had a far more profound impact on world culture than his."
Posted by Beattie's Book Blog at 8:17 pm

V S Naipaul is a mysogynist prick whose works are dying.He accurately foresaw their relevance 3 decades ago. "They will not survive me."
As he ages, his nasty behaviours - and judgements- become ever more wince-making.
Many thousand women writers both outrank, and will out-survive, this slug.

Applause, and thank you Keri - well said - what we were all thinking (although, must add, I've never read his work and I am intrigued and keen to do so) - obviously he has had his time in the sun, but his statements sound like the era in NZ when Robin Hyde received similar sort of aspersions from male writers.

Two words for VS (does he mean 'versus'?): Hilary Mantell. There are zillions more but Wolf Hall trumps anything he ever did.

I think his criticism to female writers could really give an insult.
I guess every writers has an own capacity and skills in writing whatever topics they may write. :D

Maybe he is not aware of this information that this site http://digital.library.upenn.edu/women/ has the list of successful women writer.

Nice post which The author, who was born in Trinidad, said this was because of women's sentimentality, the narrow view of the world". And inevitably for a woman, she is not a complete master of a house, so that comes over in her writing too.
Thanks a lot for posting this article.