Salman Rushdie: 'The Arab spring is a demand for desires and rights that are common to all human beings'

The Booker prize-winner on dreams of his father, marriage, the fatwa – and the death of Osama bin Laden
Tim Adams, The Observer, Sunday 26 June 2011 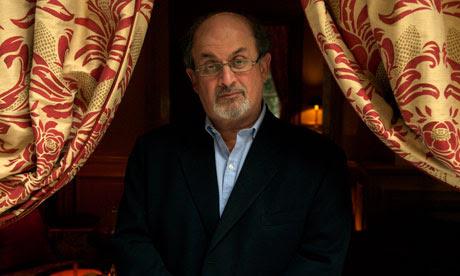 'Haroun and The Sea of Stories was when I started writing as the dad rather than the child'. Photograph: Ulf Andersen/Getty Images

Your latest book, Luka and the Fire of Life, is dedicated to your youngest son, Milan, who is 14. And it's a sequel to Haroun and the Sea of Stories, which was written for your eldest son, Zafar, now 31, at a time when your life was threatened by the fatwa. You've written a lot about fathers and sons…


Well, I only have sons, so in one sense it is all I know. The thing that has shifted with age is that when I was writing Midnight's Children and those earlier books, right up to The Satanic Verses, the point of view was from the child looking up to the parent. Then you realise the point of view has shifted. Haroun was that moment – when I started writing as the dad rather than the child.

Your own father was a storyteller?
Not by profession, but he told us good stories. When people read these two books there is an assumption that the character Rashid is me, but I also think of it as being inspired by my father, the first storyteller in my life. A lot of the early Indian wonder tales I first heard in his version of them. He was a scholar of Arabic and Farsi so he was able to read some of this in the original.

Do you hear his voice when you are writing?
Not so much lately. But he still shows up in my dreams, usually as a quite severe critic. Though even then he is much nicer in my dreams than in life… much more understanding.

I also feel Lewis Carroll hovering around the edge of this new book, Luka and the Fire of Life. When did you first read Alice?
Before I ever came to England. The English children's literature that got out to India was hit and miss. I mean, Arthur Ransome made it, and I just read that [Swallows and Amazons] as a piece of surrealism: who are these children on a lake who go off for days on their own and sleep on islands? Flying carpets were much less extraordinary. Billy Bunter made it; Winnie the Pooh didn't. But Alice did get there and I loved those books. Almost the only thing I am proud of about going to Rugby school was that Lewis Carroll went there too.
Full interview at The Observer.
Posted by Beattie's Book Blog at 7:44 pm