Memoir aims to encourage discussion about dying and bereavement 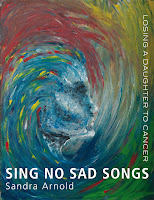 Dr Arnold wrote Sing No Sad Songs for her PhD in Creative Writing from Central Queensland University. After the death of her 23-year-old daughter Rebecca from a rare appendix cancer nine years ago she found there was very little information about the emotional, physical, mental and spiritual effects of grieving the death of a young adult child from cancer.
“Part of the reason for this is that cancer in the 18 to 25-year-old age group is very rare. Because of the lack of information I decided to help fill the gap by writing my PhD thesis on the topic. My thesis comprises a memoir of my own experience of parental bereavement and an exegesis on psychological and sociological theories of grief, how grief is dealt with in Western societies, the language of grief and how narrative can be used as a tool to help the bereaved.”
Dr Arnold said her aim was always to have the memoir part of her thesis published as a book so that it would be accessible to others outside academia, as a way for other bereaved parents to recognise and give voice to their own stories, and for the non-bereaved to gain an understanding of what it feels like to be in the skin of a bereaved parent.

“The non-bereaved sometimes have difficulty in empathising with bereaved parents. In Western societies language often fails when talking to the bereaved and euphemisms, platitudes and clichés are used to express condolence because many people do not know what to say.”

Dr Arnold says when doing research for the exegesis component of her thesis she came to the conclusion that post World War II New Zealand had become a “death denying society”. Searching through obituary pages in newspapers she failed to turn up one reference of someone having “died”, but many euphemisms such as “passed away” and “laid to rest”.

Dr Arnold says people sometimes avoid talking to bereaved parents not only because they don’t know what to say, but because in contemporary Western society the death of a child is too painful to contemplate. Healthcare professionals, used to so much death, sometimes lack sensitivity in dealing with the bereaved. She describes both situations in her book from her own personal experience.

“Because emotional injury, unlike physical injury, is largely invisible, society expects bereaved parents to return to ‘normal’ in an unrealistic time frame. Sing No Sad Songs suggests that although bereaved parents never ‘get over’ the death of their child it is possible to learn to live with the pain and also to live a full and productive life again.
Sing No Sad Songs was launched by Fiona Farrell, at Okeover House at the University of Canterbury on 23 June.
Ms Farrell wrote the foreword for Sing No Sad Songs and describes it as “a brave and wonderful book about death, pain and love”.
About the author:
Sandra Arnold lives in North Canterbury with her husband, four alpacas and a dog and teaches at Christchurch Polytechnic Institute of Technology. She has a MLitt and PhD in Creative Writing (Central Queensland University) and is the author of two novels. Her short fiction has been broadcast on Radio New Zealand and widely published and anthologised in New Zealand and overseas.
Posted by Beattie's Book Blog at 12:12 pm

It is great to see that Sandra has been able to use her writing to illuminate the journey others must make when dealing with this type of bereavement.

Yes, she does it so well too Rosemary. I was weeping buckets in places.