Come Meet the Author, but Open Your Wallet 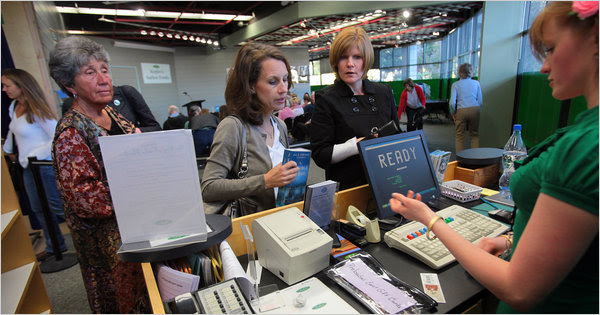 Independent bookstores, squeezed by competition from Internet retailers like Amazon, have long done something their online brethren cannot emulate: author events. And now many bookstores say they have no choice but to capitalize on this grand tradition they are charging admission.

Bookstores, including some of the most prominent around the country, have begun selling tickets or requiring a book purchase of customers who attend author readings and signings, a practice once considered unthinkable.

“There’s no one right now who’s not considering it,” said Sarah McNally, the owner of McNally Jackson Books in the SoHo neighborhood of Manhattan. “The entire independent bookstore model is based on selling books, but that model is changing because so many book sales are going online.”

The Boulder Book Store in Colorado caused a stir in April when it announced it would charge $5 a person to attend store events. In April, Kepler’s Books, an independent in Menlo Park, Calif., began charging customers a $10 gift card, which admits two people to each author appearance. (They also have the option of buying the book in exchange for admission.)
Ms. McNally is overseeing the construction of an event space in the lower level of her store, a warmly lighted shop on Prince Street. As soon as the space is ready, she said, the store will start charging admission to its events.
Read the full story at the New York Times
Posted by Beattie's Book Blog at 8:31 am