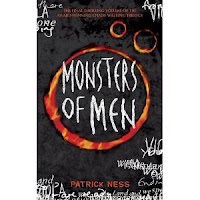 In his acceptance speech during the award ceremony at Bafta, Ness said: "Here is a man who races to the latest news about what a tragedy it is that three out of 10 children don't own a book. Yet utterly fails to see the irony of how closing libraries will affect not only the three who don't, but the seven who do and who would like to read more and more and more.
"While the government says it wants children to read, it is not providing the means to do so. For children, libraries are a place that isn't tested or limited or assigned, a place where children can find surprising paths and guidance if they want it."

Ness also defended librarians whose jobs are at risk of being lost to volunteers, "a one-sentence, Big Society idea whose ramifications and consequences they haven't even remotely considered," he said. "Librarians open up the world. Knowledge is useless if you don't even know where to begin to look."

Monsters of Men is the final book in Ness' Chaos Walking trilogy and each of the three books has been shortlisted for the Carnegie Medal—the first time this has been achieved by a series. Ness said: "Although I grew up in the US, I have always been aware of the Carnegie award. I remember finding books in the library with ‘Carnegie Award Winner' on them, so it has always meant something special to me."
Monsters of Men brings together all the themes explored in the earlier Chaos Walking titles, said Ness. "These are big questions like what does war mean, what does it mean to be an individual in a war, how complicated real love can be – all the themes that have been leading up to the final book."

The CILIP Carnegie Medal and CILIP Kate Greenaway Medals are awarded annually for children's fiction and illustration. The shortlisted and winning titles are chosen by specialist children's librarians.
Posted by Beattie's Book Blog at 6:31 am