10 years on and New Zealand is still ‘Middle-earth’ to thousands of moviegoers and Tolkien fans . . .

It’s no secret that since the first screening of The Lord of the Rings: The Fellowship of the Ring in 2001, New Zealand has become the embodiment of Middle-earth to millions of movie-goers and JRR Tolkien readers the world over.
Ten years on, the interest in the Lord of the Rings movie locations shows no signs of decline. Ian Brodie, Media and Communications Manager for the Hobbiton Movie Set in Matamata, reports that over 200,000 visitors have been through Hobbiton alone since its opening and close to 45,000 people are expected to visit this year. 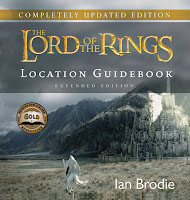 Ian Brodie is also the author of The Lord of the Rings Location Guidebook, first published in 2002 and the beautifully produced keepsake, The Lord of the Rings Location Guidebook Extended Edition, published in 2004. Sales across both titles now exceed a staggering 357,000 copies, placing them amongst the biggest-selling official Lord of the Rings movie tie-ins.
‘The visitor numbers for Hobbiton and the sales for these two books prove the longevity The Lord of the Rings,’ says Brodie. ‘These figures alone cement in place that New Zealand is now well and truly Middle-earth.’
Both editions of the guide have now been completely revised and updated, and include more of Ian Brodie’s stunning on-site photography for a new generation of Lord of the Rings tourists and collectors.
The guides showcase the principal movie-set locations around New Zealand as seen in the movie trilogy. The two books share valuable background information and exclusive anecdotes about the filming of the trilogy, new maps and location directions, GPS references, useful Internet addresses and up-to-date information on accommodation and restaurants handy to the sites. Included in both guides are quotes from the cast and crew, a foreword by Peter Jackson and location notes by Alan Lee.
There are also explanatory notes on geographical and historical features of ‘Middle-earth’ that will help the novice who has not read The Lord of the Rings trilogy to understand events in the film more fully.
What research did Ian Brodie do for all this? Here are the facts and figures:
·       He’s read the Lord of the Rings trilogy 39 times over the past 30 years.
·       He’s watched the three movies at least 40 times (at the cinema and on DVD).
·       He’s talked to local tourist organizations.
·       He’s travelled New Zealand visiting all the locations sites (and he revisited many sites for the new editions).
·       He’s visited New Line Cinema in Los Angeles to obtain extra film images.
·       He’s spent time with the film crew in Wellington reading scripts and call-sheets.
·       He appeared as an extra in The Return of the King.
Ian Brodie is also the author of a number of other photographic and film-related titles, including Cameras in Narnia, which was a finalist in the NZ Post Children’s Book Awards and runner-up for the Children’s Choice Award.  Ian loves travel and for many years worked in the travel industry. In 1992 he took the post of inaugural Director for the NZ Fighter Pilots Museum in Wanaka, which he held until moving to Matamata and Hobbiton in 2009.
W: www.ianbrodiephoto.net  |  W: www.ianbrodie.net  |  F: www.facebook.com/IBrodiePhoto
THE LORD OF THE RINGS LOCATION GUIDEBOOK
Ian Brodie | RRP $27.99 | new edition to be published early August 2011
THE LORD OF THE RINGS LOCATION GUIDEBOOK EXTENDED EDITION
Ian Brodie | RRP $44.99 | new edition to be published early August 2011
Harper Collins
Posted by Beattie's Book Blog at 2:14 pm