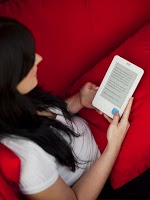 The Bookseller - 28.06.11 | Bookseller Staff
E-reader ownership in the US has doubled over the past six months, the first time ownership of e-readers has reached double digits among US adults. Sales of tablet computers, however, have not seen the same level of growth, with e-reader growth outpacing tablet growth since November last year, confounding predictions that multimedia devices would overtake single-purporse devices.
According to a report carried out by the Pew Internet Project, Hispanic adults, adults younger than age 65, college graduates and those living in households with incomes of at least $75,000 are most likely to own e-book readers.
The overall share of US adults who own an e-reader doubled to 12% in May 2011 from 6% in November 2010. It is the first time since the project began measuring e-reader take-up in April 2009 that ownership has exceeded single figures.
Tablets including the iPad however are lagging behind, with 8% of adults reporting owning a device in May 2011, compared to 7% in January 2011 and 5% in November 2011. The survey also found an overlap, with 3% of adults owning both devices.
The numbers suggests that as many as 25m Americans own e-reading devices, while 19m have tablets, such as an iPad, Samsung Galaxy or Motorola Xoom.
There was considerable growth in e-reader ownership between November 2010 and May 2011 among college graduates, one-fifth of whom now own these devices. This group was already outpacing other adults in Pew Internet’s November 2010 survey. The survey also found that one-quarter of US adults who earned more than $75,000 owned an e-reader. Parents are also more likely than non-parents to own these devices.
While growing fast, the survey shows how far behind other devices the e-reader is in market penetration: while 12% own an e-reader, 83% of US adults own a mobile phone.
The Pew Research Center’s Internet & American Life Project survey was carried out from 26th April-22nd May 2011 across 2,277 adults
Posted by Beattie's Book Blog at 9:48 pm