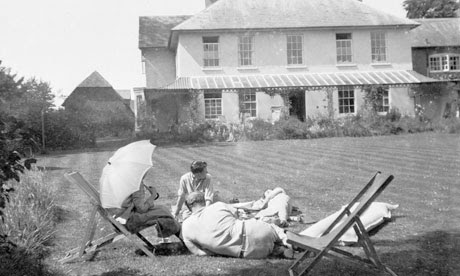 A class of one’s own: Ham Spray House, Wiltshire, c 1932. Photograph: Frances Partridge/Getty Images
It is seven years since Alan Hollinghurst won the 2004 Booker prize for The Line of Beauty, his Jamesian account of an 80s arriviste moving in high Tory circles. That novel confirmed his reputation as an acute chronicler of gay experience and its subterranean relationship to English networks of social and political power. His substantial new novel extends this project, sumptuously retelling a familiar narrative of English decline through a series of friendships and encounters which form a sort of daisy chain of erotic and literary influence, stretching from the long Edwardian summer before the first world war to the present day.

The novel deals with the short life and posthumous reputation of Cecil Valance, a Georgian poet whose lyrical outpourings are given huge poignancy by the carnage of the trenches. In the opening section, Valance, the scion of an aristocratic family, visits the family home of his Cambridge friend and lover George Sawle. The name of this house ("Two Acres") and its location (rural Stanmore, soon to be absorbed into the suburban sprawl of London's metroland) locate the two men very precisely in the English class hierarchy whose dissection is one of Hollinghurst's main fictional preoccupations.
George's discreetly alcoholic mother and starry-eyed 16-year-old sister, Daphne, are filled with wonder that such a glamorous youth, already a published writer, will be visiting them. While at Two Acres, Valance writes a long poem, ostensibly addressed to Daphne, which is destined to enter the canon, ensuring that the events of the weekend, which are described with tenderness and sensuous immediacy, will be pored over by generations of academics and admirers, their true contours gradually disappearing into a bibliographic haze.

The novel's title is taken from Tennyson's "In Memoriam A.H.H.", a high Victorian elegy to male friendship. The poet (who figures in a Sawle family anecdote, and hovers more generally over the novel as a sort of tutelary spirit) describes the trace of his love fading from the landscape, to be replaced by a "fresh association", as the countryside "grow[s] familiar to the stranger's child". This melancholic image of generational change governs the tone of Hollinghurst's book, which is concerned with the vagaries of memory and the construction of literary tradition. Its final section has an epigraph from Hollinghurst's contemporary, the poet and critic Mick Imlah, who died in 2009. From a poem entitled "In Memoriam Alfred Lord Tennyson", it reads, drily, "no one remembers you at all".

Hollinghurst's own commitment to the canon of English literature and the construction of literary memory has taken him from a lectureship at Oxford to a long spell on the staff of the Times Literary Supplement, and as the play of title and epigraph suggests, The Stranger's Child is nothing if not a book about books. Besides Tennyson, a partial list of the novel's most direct allusions would include the Waugh of Brideshead Revisited and the "Sword of Honour" trilogy, Ford Madox Ford's Parade's End, Forster (particularly Maurice and Howard's End) and Hollinghurst's acknowledged master, Henry James, particularly The Aspern Papers and What Maisie Knew. While this is a realist novel about England, written in an elegant, conservative prose, it is also a highly self-conscious performance about the construction of Englishness through literature and (to a lesser extent) music and art.

Read the full review at The Guardian.
Posted by Beattie's Book Blog at 8:07 pm