The reinvention of the book 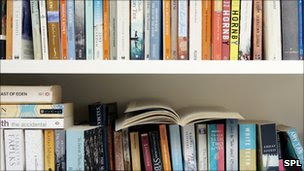 Video never did kill the radio star. But it might cause a lot of books to be pulped. Re-written by machine and new technology, paperbacks could become ancient history. Oh-a-aho no.

Oh-a-aho yes, according to John Makinson: chairman and chief executive of the Penguin Group. The likable, ebullient publishing boss - a Tigger in the CEO jungle - foresees a new age where books become electronic gateways to trivia and chat:
"I don't expect that readers will open Jane Austen on page one and read through to page 300 and then put the book down.
"I think they will go on little journeys into other media and other conversations and they will want to do research into the dance moves or recipes of the period or look up info about Jane Austen online or talk to their friends on social networks about the experience of reading the book."
Good golly. Are books as a linear entity over? You'd expect to hear that from Steve Jobs while peddling iPads, but not perhaps from Penguin.
The publishing house was founded in 1935 by Allen Lane whose big idea was to mass-produce huge quantities of well-written, well-designed paperbacks that would be affordable to every household in the country.

Penguin was to be the peoples' publisher: their books read by those attending the universities of life and Oxbridge; available in bookshops and tobacconists. Within 12 months he'd sold three million copies. Visionary is in Penguin's DNA.
So maybe John Makinson's prediction is correct. E-books are all the rage.
Sales increased by 318% in 2010 and continue to motor. Most predict that at least 50% of all books sold within ten years will be digital downloads.
Apple has already sold over 25 million iPads, Amazon is also doing brisk trade in Kindles and then there's Sony's e-reader and so on.

Reading (especially Jane Austen) is reading, not gaming or surfing! This sounds like nothing more than infiltrating ads into books as if they were TV programmes - which has always been my great fear in terms of the e-book. Hyertext inviting you to be diverted to a site that jsut happens to be selling teh msot authentic reproductions of Regency furniture, DVDs of the film of the book you're "reading", and so on ad nauseam. Yuk.