No fangs ... Anne Rice at home in 2003. Photograph: Bill Haber/AP
Angels are the new vampires of the literary world, according to the doyenne of vampire fiction Anne Rice, who is about to launch a new series of books starring a contract killer recruited by a seraph. Taking their inspiration, perhaps, from Milton's arch-fiend Satan, Rice and a host of other authors are plotting celestial assaults on the book shops this autumn, with angels in all shapes and sizes about to hit the bookshelves. The line-up includes Becca Fitzpatrick's Hush, Hush ("a sacred oath, a fallen angel, a forbidden love"), out later this week, Elizabeth Chandler's Kissed by an Angel (about a guardian angel) and the Carnegie medal-winning American writer Sharon Creech's The Unfinished Angel, featuring a celestial being undergoing an identity crisis.
"Being on the side of the angels, it feels much better than being on the side of the vampires. Vampires were tortured, tragic figures," Rice told the Wall Street Journal. 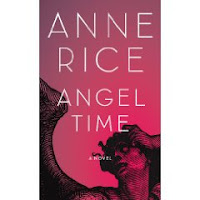 Her novel, Angel Time: The Songs of the Seraphim, follows the adventures of Toby O'Dare, an American killer who is given the chance by a mysterious stranger (who turns out to be an angel) to go back to 13th century England to find salvation.
"Vampires for me were always like feeling grief for my lost childhood faith, being cut off from that life. I reached the point where I didn't have any more stories to tell from that point of view," explained the author, who said the angel series was "In keeping with [her] commitment to do Christian fiction in a variety of forms" since she converted from atheism back to her childhood Catholicism in 1998.
Now that she doesn't write her vampire chronicles any more, Rice said she feels "free to enjoy" the recent glut of all things vampire. "I think it's wonderful fun," she said. "When I was writing my own, I wouldn't have wanted to be influenced."
Read the rest of Alison Flood's story at The Guardian online.
Posted by Beattie's Book Blog at 6:43 am

This story is so believable-angels and time travel. I loved it! Anne Rice has devoted her writing to God and in this writing lets us know that redemption is for everyone. I wanted it to go on and on; I can only hope that the second in the series will be as good as the first. Kudos to Ms. Rice for being inspired to pen "Angel Time"