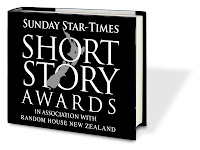 Supreme Award for the open division went to Waimate writer Sue Francis for “The Concentrators”, who struck gold with her third entry into the competition.
Head judge of the Awards’ open division Elizabeth Smither says “The Concentrators” has all the right ingredients for a winning short story – engaging characters, similies and subversive humour.
“The Concentrators” is a small town New Zealand story about an unlikely friendship between two young women who meet every Friday night over a game of tennis.
“Sue Francis’ story is fun, interesting and yet it still has something to say,” says Smither.
Francis has won $5000 in cash, publication of her story in the Sunday Star-Times as well as $500 worth of books from Random House.

Sounds like a great night out.
I want to say to you Bookman Beattie that you are a shining star in the world of books in NZ. You are a huge and positive force for authors and publishers and booksellers and for ordinary library-using readers like me.
I hope your work is appreciated widely. Certainly this rural reader is most appreciative.Thank you.

I tell my students you (Graham Beattie) and your blog is the OPRAH of the NZ Publishing scene.

No getting up in arms people - I love Oprah and feel she has the power to show the world things they would not normally see.

Every one of my writing group consistently check Bookman's blog. A lot is over their heads (bless them) but they hang in there and every week we have a wonderful time discussing, not only our on efforts, but the screeds and screeds of links and opinions from around the world associated with writing.

Give this man a Knighthood!

Oooh, my word verification is: girre heheheh as in GRRRRR

James Power & TK Roxborogh - thank you so much, you make me blush, but I am greatly chuffed to know how useful you find my blog.
Thank you, thank you.You make the long hours and effort (but great fun too)all worthwhile.

Yes a great night out indeed!

As last year's winner, and as a prejudge this year, I have to say I am extremely impressed with The Sunday Star Times/Fairfax Media crew, and also with Random House, regarding their championing of short fiction in Aotearoa NZ. And I cannot overstate how grateful I am for the fine running of the awards ceremony.

I can attest to the fact that shortlisted contestants and prejudges are thoroughly cared for throughout the entire process, from selection in the top three and prejudging panel selection, to the ceremonies, the valet parking and comfortable beds at the accomodation, and the tour of Random House.
Thanks Juliana, Cherie, Josh, Donna, Harriet, Jennifer, and all the crews from the SST and Random House Publishers for your manaakitanga/hospitality and generosity over the last two years.

This competition is such a motivation to writers, to meet that deadline and let the creative spirit soar.

It was heartening news for the future of NZ short fiction to hear a major managerial representative of Fairfax Media pledge the organisation's ongoing support to the future of the competition.

Here's to another 25 years!

Oh yes - and BIG UPS to the Bookman...I could almost be addicted to your blog!!!