A PILE OF POETRY

This pretty pile of poetry landed on my desk last week and I have had a lot of fun reading through them. I have been variously amused and entertained, moved and saddened and throughout filled with admiration for four contemporary NZ poets and one long dead British poet and their impressive ability with the poetic form. All quite different, all most impressive.
And as an aside The Bookman notes that AUP and VUP continue to largely dominate the poetry publishing scene in NZ.

For more than forty years novelist, essayist and curator Ian Wedde has also been one of New Zealand’s foremost poets. In this his fourteenth collection, Wedde writes of business in the streets of Wellington, the flickering screens of dreams, the rivers of Bangladesh and in the south of France, where ‘light bruises / the body of the earth’.

This poem is called Toyota:

In mid-March the city fills up with Monarch butterflies,
The red flags of the Toyota sale yards all flap south.
In some way I find hard to describe
I know it’s always been like this.

VUP $25
In 2007 Bernadette Hall spent six months in Ireland, not far from Blarney, on the Rathcoola Fellowship. The poems in this collection arise from that experience.
With light-heartedness and daring, they track between dualities: the North and the South in Ireland; the rain-washed skies of Donoughmore, Co. Cork and the Queensland rainforest. Between national and personal histories. As for poetry, what is it to be, an axe or a peace offering?

Bernadette Hall is an award-winning poet who lives in North Canterbury. Her work has been included most recently in Twenty Contemporary New Zealand Poets, edited by Andrew Johnston and Robyn Marsack (VUP/Carcanet, 2009). She is a founding staff member of The Hagley Writers’ Institute in Christchurch.

On an ordinary day, in ordinary New Zealand, an ordinary girl becomes extraordinary. Told through her mother’s eyes, Walking to Africa follows the young girl’s journey through the strange, new and sometimes frightening world of mental health care. We meet specialists A through F, other kids, friends who want to help, an angel/nurse and the Ghostman – alongside therapies and cures, strategies and rites.
Jessica Le Bas’s Incognito (AUP, 2007) won the NZSA Jessie Mackay Best First Book of Poetry at the 2008 Montana New Zealand Book Awards. In 2007 Le Bas was one of the inaugural recipients of a New Zealand Mental Health Media Grant. She lives in Nelson.
Cover illustration and design: Keely O’Shannessy

VUP $25
I have to confess this is my favourite.
Brian Turner’s ongoing love affair with his Central Otago home lies at the heart of this rich and compelling new collection of poems.
Turner is one of New Zealand’s leading poets. His first collection, Ladders of Rain (1978) won the Commonwealth Poetry Prize, and his sixth, Beyond (1992), the New Zealand Book Award for Poetry. He was New Zealand Poet Laureate 2003-2005.

His acclaimed work in other genres includes co-authorship of the autobiographies of All Black stars Josh Kronfeld and Anton Oliver, a biography of Colin Meads, significant contributions to Timeless Land and The Art of Grahame Sydney, and his superb 2008 title Into the Wider World: A Back Country Miscellany.


Old Possum’s Book of Practical Cats
T.S. Eliot - Illustrated by Axel Scheffler
Faber - $32.99
A stunning new illustrated hardback edition of one of history’s most loved collections of poetry.
Macavity’s a Mystery Cat:
he’s called the Hidden Paw-
For he’s the master criminal who can defy the Law.
He’s the bafflement of Scotland Yard, the Flying Squad’s despair:
For when they reach the scene of the crime – Macivity’s not there!

Who could forget the gorgeous poetry of T.S. Eliot, introducing lovable cats such as Macavity the mystery cat, Mr Mistoffelees the conjuring cat, the evil cat Growltiger and the Theatre Cat Gus- as well as many others. 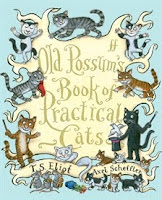 In 1981 Eliot’s poems were set to the music by Andrew Lloyd Webber as Cats, which went on to become the longest-running Broadway musical in history.
This new edition is published on the 70th anniversary of the book and contains original colour illustrations by the award-winning illustrator of The Gruffalo, Axel Scheffler.
A perfect Christmas gift for all cat-lovers and poetry fans!

About the creators:
Thomas Stearns Eliot (1888-1965) was born in St Louis, Missouri, USA. He settled in England in 1915 and published his first book of poems in 1917. In 1925 he became co-director of Faber and Gwye- later to become Faber and Faber -who remain his publishers to this day. In 1948 Eliot received the Nobel Prize for Literature.
Axel Scheffler was born in 1957 in Hamburg, Germany. He has achieved worldwide acclaim for his children’s book illustration and has created many bestsellers including the award-winning The Gruffalo. He lives in London.

Poetry Book – Walking to Africa – tops the Nielsen BookScan bestselling NZ fiction list a week after its launch
Award-winning New Zealand author, Jessica Le Bas's poetry collection Walking to Africa was announced as the number one best selling New Zealand book of fiction a week after its launch on 9 October.
Booksellers NZ, which lists the weekly bestsellers lists from Nielsen’s weekly BookScan has Walking to Africa listed above four other New Zealand books by authors Kate De Goldi, Maurice Gee, Elizabeth Knox and Tania Roxborogh. It is very rare for poetry to make it anywhere near the Top 10 let alone head the list.

Sam Elworthy, Director of Auckland University Press (publishers of Jessica’s book), says that seeing a collection of new poetry at the top of the bestseller charts “a great indicator of New Zealand’s cultural vitality”.

“Jessica Le Bas’s Walking to Africa is the most moving book I have read in a long time and it is wonderful to see it getting the wide readership it deserves.”

The story (told in poetry) is through a mother’s eyes as she follows her young daughter’s descent into severe depression and through the strange, new and sometimes frightening world of mental health care.
Readers meet specialists A through F, other kids, friends who want to help, an angel/nurse and the Ghostman – alongside therapies and cures, strategies and rites. They are shown glimpses of the realities, the fragility, the unknowing and unknown.

Jessica says, “Walking to Africa emerged as a way of exploring the strange mental-health-care planet our family had arrived on.
“Mental illness was not something I knew about. Depression can be a horrible experience, and for a child not responding to medication it is an unimaginable place, for everyone who loves them.”
“Lost, I wanted directions, answers, remedies and ways of understanding what was going on. I wanted a map that showed the terrain – the way in and the way out.”

Ultimately, Jessica says there are a myriad ways of managing and living with mental illness, but “it is a complex field that can feel scary for families with no experience of mental illness in their lives.”

“Anyone who reads Walking to Africa will gain valuable insights and a greater understanding around experiences of mental distress, which - we hope in turn - will reduce stigma and discrimination.”

Author Jessica Le Bas, has been writing and publishing short fiction and poetry for many years. She has won several awards for her poetry including the 2008 NZSA Jessie Mackay Award for the Best First Book of Poetry for her first collection of poems, Incognito (Auckland University Press, 2007).

Auckland University Press published Walking to Africa and a 2007 NZ Mental Health Media Grant funded the writing of the collection. To read more go to:
http://web.auckland.ac.nz/uoa/aup/book/2009/lebas-walking-to-africa.cfm and http://www.booksellers.co.nz/book-news/nzs-bestsellers/nielsen-weekly-bestsellers-list-171009

So pleased for Jessica. What an amazingly generous and warm woman she is (I connected with her during the Ladies' Litera-Tea at Auckland Grammar). She, like me is a teacher. She, like me has girls.

Her poetry is so accessible. I read the whole book on the plane home and worked hard not to weep.

For these last three weeks, I have treated my senior students to her poetry as they prepare for final exams. They have so many questions so I direct them to the Radio New Zealand National interview. Not enough - many of them have gone to the book store to buy their copy.

Sad and wonderful.
Kia kaha to her and her whanau