“Try always,” says the worldly Cardinal Wolsey in “Wolf Hall,” ­Hilary Mantel’s fictional portrait of Henry VIII’s turbulent court, “to find out what people wear under their clothes.” Katherine of Aragon, the queen who can’t produce an heir, wears a nun’s habit. Anne Boleyn, the tease eager to supplant her, won’t let the king know what she’s wearing until their wedding night; she says “yes, yes, yes” to him, “then she says no.” Thomas More, willing to go to any lengths to prevent the marriage, wears a shirt of bristling horsehair, which mortifies his flesh until the sores weep. As for Thomas Cromwell, the fixer who does the king’s dirty work just as he once did the cardinal’s, what is he hiding under his lawyer’s sober winter robes? Something “impermeable,” Hans Holbein suspects as he paints Cromwell’s forbidding portrait. Armor, maybe, or stone. 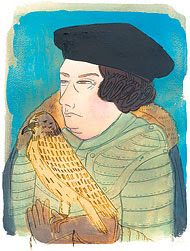 Go to the Frick Collection in New York and compare Holbein’s great portraits of Cromwell and More. More has all the charm, with his sensitive hands and his “good eyes’ stern, facetious twinkle,” in Robert Lowell’s description. By contrast, Cromwell, with his egg-shaped form hemmed in by a table and his shifty fish eyes turned warily to the side, looks official and merciless, his clenched fist, as Mantel writes, “sure as that of a slaughterman’s when he picks up the killing knife.” One of the many achievements of Mantel’s dazzling novel, winner of this year’s Man Booker Prize, is that she has reversed the appeal of these towering rivals of the Tudor period, that fecund breeding ground of British historical fiction as the American Civil War is of ours.

Cromwell is the picaresque hero of the novel — tolerant, passionate, intellectually inquisitive, humane. We follow his winding quest in vivid present-tense flashbacks, drawn up from his own prodigious memory: how he left home before he was 15, escaping the boot of his abusive father, a brewer and blacksmith who beat him as if he were “a sheet of metal”; how he dreamed of becoming a soldier and went to France because “France is where they have wars.” Cromwell learns banking in Florence, trading in Antwerp. He marries, has children and watches helplessly as the plague decimates his family.

In short, Cromwell learns everything everywhere, at a time when European knowledge about heaven and earth, via Copernicus and Machiavelli, is exploding. At 40, he “can draft a contract, train a falcon, draw a map, stop a street fight, furnish a house and fix a jury.” He knows the entire New Testament by heart, having mastered the Italian “art of memory” (part of the inner world of Renaissance magic that Mantel drew on in her comic novel “Fludd”), in which long lines of speech are fixed in the mind with vivid images.
Read the full review at NYT.
Posted by Beattie's Book Blog at 7:23 am