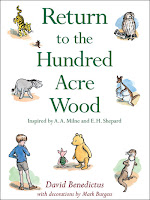 Poisoned chalice: A band of brave authors has taken on the unenviable task of writing sequels to classics such as Winnie-the-Pooh,'Hitchhiker's Guide', 'Winnie-the-Pooh', 'Where the Wild Things Are' – sacred cows all.
Yet a band of brave authors has written their sequels. What's driving this explosion in the 'update' genre? And are the results as outstanding as fans will demand?
By Paul Bignell and Andrew Johnson
The Independent, Sunday, 25 October 2009
"For the first time in decades I feel the uncertainty that I last felt in my teenage years."
The Irish author Eoin Colfer isn't talking about the birth of a new child or the dawn of a new relationship, but rather tackling a book full of characters and ideas that weren't his own.
Eve

n for a seasoned author such as Colfer, taking on the late Douglas Adams' phenomenally successful Hitchhiker's Guide to the Galaxy series – five books that have sold more than 16 million copies worldwide – was not something to be taken lightly. And even now that his And Another Thing..., billed as the sixth book in the series, has been published, it is apparent that Colfer's anxiety has lessened only slightly. "There are still a lot of, almost, threats. As if people are saying, 'This had better be good.'"
Colfer's book joins a list of recent "authorised sequels" to classics, in which some brave authors have written the further adventures of characters from Peter Pan and Dracula to James Bond and Winnie-the-Pooh.
And there are more on the way. This week, for example, sees the publication of The Wild Things, by Dave Eggers, to coincide with the eagerly awaited film adaptation of the Maurice Sendak original, Where the Wild Things Are.
It is easy to understand any anxiety over such a seemingly thankless task. These writers are expected not only to get into the mind of the original author, but also, in the same stroke, to take the story on in their own voice. If they fail, they risk invoking the wrath not only of their publishers and the literary estates that have bequeathed them their fictional worlds – and which expect a decent financial return – but also the legions of fans of the originals.
David Benedictus, who first came to the public consciousness in the 1960s with his controversial novels The Fourth of June and You're a Big Boy Now, recently published an addition to one of the best-loved children's series of all time. But when it was announced earlier this year that he would pen the sequel to Winnie-the-Pooh, 80 years after AA Milne and the illustrator EH Shepard first brought Christopher Robin and the little yellow bear to a generation of children, knives came out in the blogosphere.
"Shameless, utterly shameless! Reading old copies of Punch and walking in a wood will never make the author into another Milne," sniped one. And those who owned the rights weren't spared the fury: "It's not the bear who has 'very little brain' but rather the Trustees of the Pooh Properties."
Benedictus is surprisingly equivocal in his response to this vitriol – "What's the worst thing that can happen, that I'll be torn apart by wild journalists? Happened before and I survived" – but he does admit that, "At worst everyone will hate me and I'll just crawl under a bush and hide."
No matter what the fans might think, not just anyone is allowed the

opportunity to be involved in this sort of project. Just obtaining the literary rights to a novel or a character can be a legal and ethical minefield. Benedictus spent eight years persuading the Milne estate that he was the man for the job, while, for the latest James Bond instalment, Devil May Care, many people needed convincing that the otherwise wildly successful Sebastian Faulks was up to the task. The rights to James Bond belong to the Broccoli family's EON Productions, so permission had to be sought there as well as from the Fleming estate.
"It's a delicate and sensitive situation for someone who controls an estate with such a huge reputation," says Alex Clarke, a commissioning editor at Penguin Books who sanctioned both Faulks' Devil May Care and Colfer's And Another Thing... "Anyone who goes into this kind of project has to have a huge amount of respect for the originator's concept or characters."
So why do writers put themselves through it? Is it more than just a commercial opportunity? "The fact is that these characters are too good, too full of potential to be left alone. If they can be brought back sympathetically, then it's a great thing," says Jon Howells at Waterstone's. "But yes, the books are good for publishers financially as they are proven properties with years, if not decades, of the nation's love behind them. James Bond, Hitchhiker's Guide and Winnie-the-Pooh are some of the best-known franchises in the world, so they do have an advantage."
The full story at The Independent online.

And for more on the new Hitchhiker here is a piece from the Sydney Morning Herald.
Posted by Beattie's Book Blog at 2:11 pm

Brave?
SHRIEK!
These are fuckers dealing with dead authors' ideas for financial gain.
To say "o these ideas/characters etc. are so good they should be kept going" is utter lowdown smarm-speak for "how can I make a lot of $$$ outa this?"
I despise each & every so-called author who utilises a dead author's work.
Bad cess to you - & I really mean that.

I tend to think it depends on whether or not it's warranted. What would "warranted" be? Well, for instance, the Dracula one is from Stoker's notes, apparently.

What's absolutely horrible is making a sequel and then contradicting the facts of the original... as the "official" Peter Pan sequel has done!

There is, however, a Peter Pan novel based on J.M. Barrie's very own idea for more adventure... click my name to see it.

That, I think, is the only time and way to do it... with utmost care and using what the original author left behind (if anything.)

I'M going to be brave and raise my head above the parapet here:
I wrote a sequel based on another's ideas just as HE wrote his play based on other's ideas. HE wrote beautifully rich metaphorical imagery; I write how I write. But, the story and the characters I have in my head are mine. The Fleance HE fleetingly referred to is, in my novel, fully developed from MY head. All I did was address Macbeth's anguished cry: “Yet my heart
Throbs to know one thing: tell me, if your art
Can tell so much: shall Banquo's issue ever
Reign in this kingdom?”

And I damn well hope it becomes the international best seller that everyone says it will and I get rich enough to pay off the mortgage, write full time, feed the family, give my dear mum a holiday (and pay off her debt) and.... I think you might get the idea.