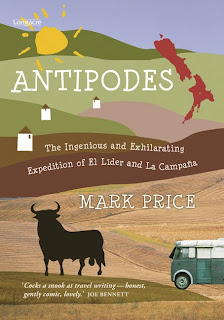 From those good southern folk at Longacre Press:
A Folly. Perhaps?

Antipodes: The Ingenious and Exhilarating Expedition of El Líder and la Campaňa
By Marck Price
Published by Longacre Press, RRP 34.99

The folk at Longacre report that they fell about laughing when they first read the manuscript of Antipodes: a new quirky travel book with an endearing difference. ‘It’s one of those books that just begs to published’, according to Barbara Larson. "At first we regarded it as our folly of the decade, but as positive reviews from delighted reviewers started arriving we’re not so sure… We’re happy to be proved right. Or is that wrong?"

In his book Mark Price tells the bare truth of his expedition to the other side of the world to find New Zealand’s Antipodes. With his six white poplin shirts and rented Ford Focus he proves the perfect fall guy for the somewhat downbeat expedition members, and the ever frugal La Campana. Effortlessly, he captures the kiwi sense of the ridiculous with a dry, dead pan humour and an economy of words.

Longacre’s attempts to organise a book launch at the UBS in Dunedin were met with a similar economy. But ‘NO’ said he. ‘It doesn’t sit well with me. Surely the money could be better spent.’ Bronwyn Wylie-Gibb at the UBS Otago was reported to say in response, ‘I am intrigued, in 23 years of bookselling he is first author who truly doesn't want a launch - is he really Pynchon perhaps?’

(The American writer Thomas Pynchon is known for his avoidance of publicity; very few photos of him have ever been published and rumours have been in circulation for years about his location and true identity.)

Joe Bennett writes of Antipodes, ‘It cocks a snook at travel writing, while succeeding as travel writing. Honest, gently comic, lovely.’
And Rachel McAlpine in her blog writes:
‘The execution: Perfect Prose. Darling Deadpan. Magnificently ego-free travel writing, with happy whiffs of Toad Hall, Three Men in a Boat and Louis de Bernière's recent charmer, Nothwithstanding. ‘As I read and walked simultaneously, proving yet again that I'm a woman of many talents, I noticed my stride had a floating, lolloping quality, echoing the rhythm of Mark Price's good plain English.‘Sheer pleasure inside a satisfying cardboard cover.’