Fiction dominates this year's Guardian First Book Award shortlist, with three of the five books in the running for 2009's award novels and one a short story collection.

Among those in the running for the award, recognising first-time writers writing, or translated into, English, is Samantha Harvey's Orange-shortlisted novel The Wilderness (Jonathan Cape).

The shortlist was decided by a judging panel, including the BBC's Martha Kearney and poet and novelist Tobias Hill, along with five Waterstone's reading groups around the UK.

Chair of judges, Guardian literary editor Claire Armitstead, said: "For the first time in the history of the award, four of the shortlisted titles are fiction. I don't think this is mere coincidence; it reflects the power of good story-telling, and is a reminder that, despite regular cries that the
novel is a dying art form, it is still the one we turn to."

Stuart Broom from Waterstone's said: "We had such a strong non-fiction winner last year it seems almost inevitable that the pendulum would swing back and we'd find fiction dominating the shortlist."

The winner of the £10,000 award will be revealed on 2nd December. The winner also receives an advertising package in the Guardian and Observer for their first book. Previous winners have included Zadie Smith and Jonathan Safran Foer.

The Bookseller today revealed that competition for the Christmas No.1 slot in Original Fiction is the fiercest it has been for five years, contrasting directly with non-fiction sales, where the threshold to get a top 10 title is at its lowest figure since 2005. 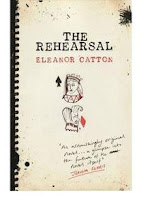 in full:
A Swamp Full of Dollars by Michael Peel (I B Tauris)

The Rehearsal by Eleanor Catton (Granta)

An Elegy for Easterly by Petina Gappah (Faber)

Yes, it is wonderful, both for Eleanor and for NZ literature - exciting.